Not bad.  So, what will 2021 hold?  First, an obvious prediction.  One of my 2020 takeaways was ETF growth is actually accelerating, which is remarkable given the first U.S.-listed ETF launched 28 years ago.  ETFs took in a record $507 billion last year.  Big name fund companies like DFA, T. Rowe Price, and Allianz are only now aggressively entering the space.  ETF fees are still dropping.  Perusing the 300+ new ETF launches last year shows that innovation is alive and well in the Silicon Valley of asset management.  All of this is to say that the ETF trends witnessed over the past several years will continue in 2021, if not quicken.  Easy assumption.  But, what else will happen this year?  Behold my 2021 ETF predictions…

1) Emerging Market Stock ETFs Finally Turn the Corner.  A prevailing narrative is that 2021 will usher in a global economic recovery as the Covid vaccine is deployed and things get back to normal (whatever that is).  Assuming that happens, it’s hard not to envision a significant bounce in emerging market stocks, which have sorely lagged U.S. stocks for over a decade now. 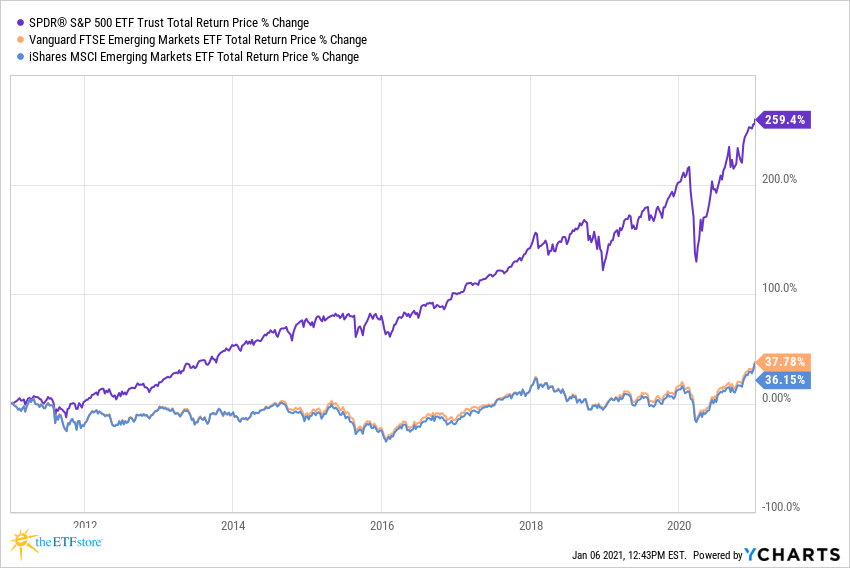 Investors have been calling for a rebound in emerging markets for a LONG time now.  Every year (with the exception of 2017), they’ve looked foolish as EM underperforms.  I get it.  But if you believe in a global economic recovery and a weakening dollar, that would seem to bode well for emerging market stock ETFs.  Attractive EM relative valuations are icing on the cake.

2) Marijuana ETFs Blaze. In 2018, I made the prediction that cannabis ETFs would begin raking-in assets after the first cannabis ETF, the ETFMG Alternative Harvest ETF (MJ), launched at the end of 2017.  My prediction proved mostly correct as MJ quickly ballooned to nearly $800 million.  2019 followed with the launch of 7 additional cannabis ETFs.  However, the space was plagued by poor performance as Canadian marijuana producers such as Tilray were over-baked.  That lack of performance carried into 2020 until just prior to November’s election.

Since early October, both performance and flows have lit up, with MJ spiking 20%.  In September, AdvisorShares launched the Pure U.S. Cannabis ETF (MSOS), a surprise hit among the 300+ ETFs launched in 2020.  The ETF is up nearly 40% and has inhaled investor dollars, quickly approaching $300 million in assets. 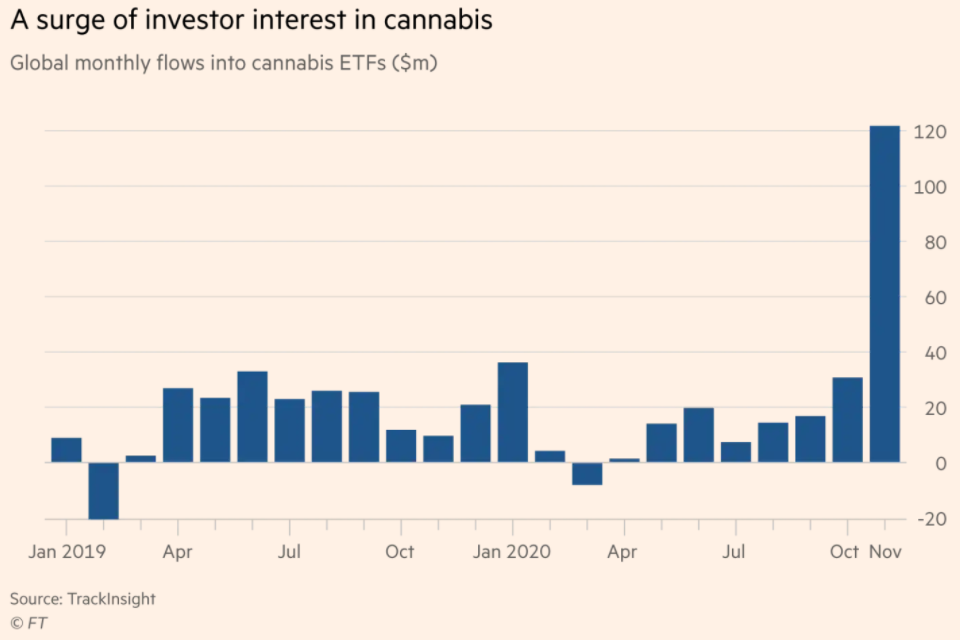 The cannabis space is obviously tethered to the regulatory environment.  Cannabis remains illegal at the Federal level, however, the incoming Biden administration has suggested decriminalization – if not full legalization – is on the table.  Fifteen states have approved recreational cannabis use, including four during the most recent elections.  Add in state budget deficits, which taxing marijuana sales could help alleviate, and the smell of change is in the air.  If the regulatory environment shifts, that could also bring institutional money, which has largely remained on the sidelines.  After a rough 2019 and first three quarters of 2020, I think the cannabis space is ready to blaze (not an investment recommendation – do your own homework!).

3) ARK Invest Runs Out of “Best” Ideas. ARK Invest was the clear-cut ETF story of the year in 2020, with the firm producing 3 of the top 10 best-performing ETFs, all five of their flagship funds returning over 100%, and investors plowing $20+ billion into the high-flying ETF lineup.  Not only that, but a potential takeover of ARK by Resolute Investment Managers was amicably resolved before the New Years’ ball dropped.  Betting that ARK can’t duplicate last year’s staggering success may seem like an easy prediction, but the firm’s Founder and Chief Investment Officer Cathie Wood has made naysayers look foolish for several years now.

The primary basis for this prediction isn’t that ARK and Cathie Wood can’t maintain a hot hand, but instead, that a global economic recovery takes hold.  If that happens, I expect a rotation into value stocks.  That would present a headwind for ARK’s growth-dominated strategies.  Even if a recovery doesn’t take hold, the stocks held by ARK aren’t exactly cheap right now.  How much further can they run?

More importantly, perhaps the biggest challenge for ARK might be the massive amount of money their highly concentrated ETFs have taken in, especially recently.  That money has to be invested somewhere – anywhere.  ARK ran a “best ideas” ad last year:

How many best ideas are left if money keeps flowing into the funds?  At some point, like any rock star active manager, they become burdened by their own success.  There’s also been speculation that ARK’s ETFs were the tail wagging the dog in some smaller cap stocks.  As flows into the ETFs accelerated, ARK bought up those smaller cap stocks, boosting performance.  What happens if flows reverse?

In the end, it seems like ARK will need a lot to go right in 2021 to replicate 2020’s success.  And despite the potential that Cathie maintains a hot hand, I just can’t shake SPIVA’s persistence scorecard from my head which shows how difficult it is for active managers to sustain success.  I absolutely love Cathie’s story and admire the success of the firm, but I expect ARK to fall back to the pack in 2021.

4) DFA Shoots Up ETF Leaderboard.  DFA finally joined the ETF party in 2020 with the launch of their first three ETFs (all transparent, by the way).  In less than eight weeks, these ETFs have taken-in over $400 million.  The firm also announced plans to convert six “tax-managed” mutual funds into ETFs and chop fees.  Those funds alone represent $25+ billion.

There’s no question DFA is showing-up late to the ETF party.  However, I think they’re arriving fashionably late.  DFA carries a big brand name and a cult-like following from some financial advisors.  Their lower cost, tax efficient, systematic strategies are a perfect fit for the ETF wrapper.  DFA arriving late to ETFs is like Brad Pitt walking through the door of an Oscars after-party at 1am.  Both are immediately the center of attention and it doesn’t matter that the party is already in full swing with people dancing on the tables.  There are only a handful of firms that could have success in ETFs no matter when they got involved.  I think DFA is one of them.

5) Yes, at long last, a bitcoin ETF finally launches! Pretty much everyone knows I’ve been wrong on this prediction before (see here and here).  Maybe I’m too close to this topic and/or married to my point of view, but I will never understand why it’s taking the SEC so long to approve a bitcoin ETF.  You can read my full case for a bitcoin ETF, but the bottom line is it’s a better mousetrap than what’s currently available to retail investors who want to hold bitcoin within the existing financial machinery (i.e., their Schwab or Etrade accounts).  President Biden will install a new SEC Chairman this year, who could take a more pro-crypto viewpoint than his/her predecessor.  SEC Commissioner Hester Peirce, aka “Crypto Mom”, is an outspoken bitcoin ETF advocate.  Just last week, VanEck refiled to launch a bitcoin ETF, which I view as a sign of confidence that winds may be shifting within the SEC.

So, once again, I’ll say THIS is the year a bitcoin ETF is approved.  If I’m wrong, I will eat a fiat US dollar bill on camera and you will never see me tweet about a bitcoin ETF again until it’s approved.  I think the biggest risk to approval is actually the unreal performance of bitcoin itself.  Bitcoin has been on a Rocketship to the moon, returning 300+% in 2020 and already up 15% in 2021.  If the price of bitcoin quickly reverses course and comes down to earth before a bitcoin ETF is approved, that might spook the SEC who clearly doesn’t want the headline risk.  Otherwise, given the premiums in products such as the Grayscale Bitcoin Trust (GBTC) and Bitwise 10 Crytpo Index Fund – which retail investors can easily access – there’s simply no reason a bitcoin ETF shouldn’t be approved.

When will the SEC approve a bitcoin ETF?