“You don’t need an ETF nerd to point out it was a monumental year for the structure.”

The Flows by Michael Batnick

“Maturation, new players, BYOA, and gamblers were the big themes in 2020.”

Breaking Down the Record Year in ETFs by Todd Rosenbluth

“ETF demand was broad based in 2020, as fixed income and commodity ETFs pulled in impressive net inflows relative to their size.”

“The top 20 ETFs to debut in 2020 by total fund assets include only three products from BlackRock Inc. and none from Vanguard Group or State Street Corp.”

“In 2020, smaller issuers managed to slightly chip away at the Big 3 more so than in any other year.”

“The costs of the new products will be critical to how widely they are adopted. Current offerings are not as cheap as basic, vanilla ETFs that track a major index like the S&P 500.”

ETF assets have jumped by over $1T for two years in a row (for context it took them 18yrs to get first trillion). Flows are good chunk of it but bigger contributor is their (now) large base get them some of that bull mkt subsidy enjoyed by mut funds. Nice catch by @tpsarofagis pic.twitter.com/Elf1Ntf4xH

ETF Chart of the Week:  It was a coming out party for thematic ETFs in 2020.  Assets grew 274% from the $27.8 billion at the end of 2019. Disruptive Technology-related thematic ETFs led the way. 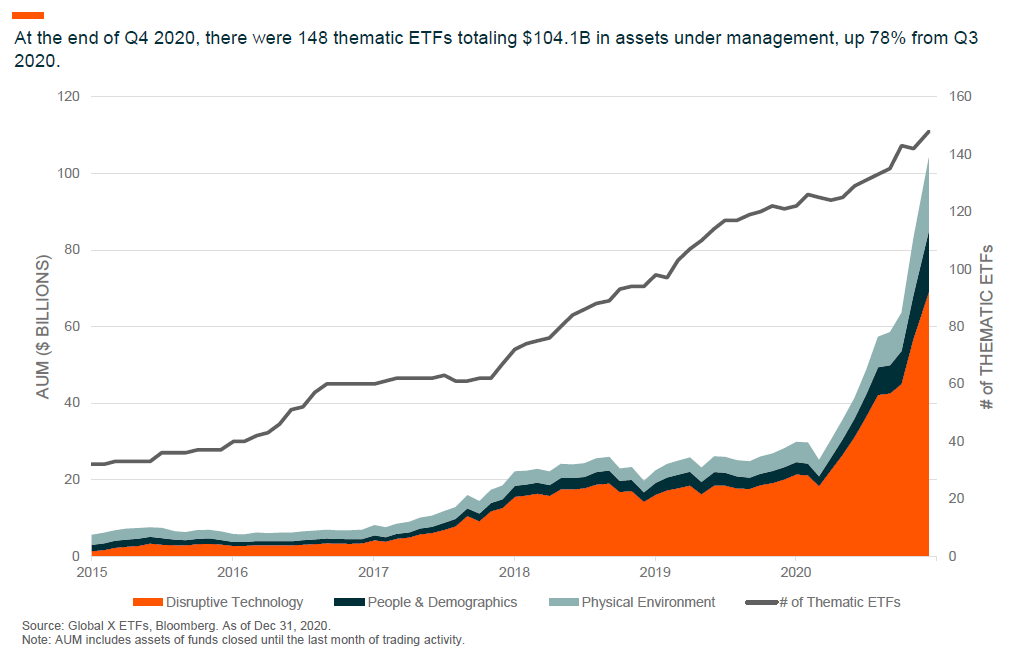