There’s an old saying that “prediction is very difficult, especially about the future”.  Please.  Check out my 2018 ETF predictions, where I’m going to give myself a little leeway and say I nailed 5 out of 5.  You be the judge – and no question my bonus prediction of bitcoin ETFs making their debut was clearly a bust – but these were mostly spot on.  Without further ado, my 2019 ETF predictions:

1) Gold ETFs shine.  Reports of gold’s death have been greatly exaggerated.  The rise of bitcoin (aka “digital gold”) and other cryptocurrencies brought claims of gold’s 5,000-year run as a store of value coming to an end.  While investors younger than 35 might prefer crypto, gold isn’t going anywhere.  With bitcoin down nearly 70% this year – and gold down less than 3% – you have to bend the imagination to think digital currencies are replacing the yellow metal anytime soon.  That might change in the future, but continued market turmoil and a pause in rate hikes will send investors flocking back to gold in 2019.  ETF providers are ready, where they have quietly been waging a fierce price war over physical gold ETFs. 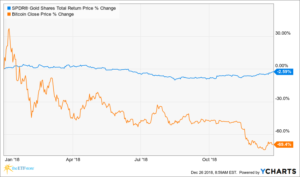 2) Charles Schwab overtakes Invesco as fourth largest ETF provider.  Schwab currently trails Invesco by about $59 billion in assets, a large gap to fill in 12 months.  However, Schwab has added $23 billion more than Invesco in 2018 and has grown assets 42%+ over the past four quarters ending September.  Schwab and JPMorgan are the two ETF providers seen most likely to offer the first zero fee ETFs.  Regardless of who gets to zero first, I think Schwab concocts a marketing blitz around fees that rivals Fidelity’s.  The combination of continued growth, buzz surrounding zero fee ETFs, and a lack of traction for Invesco’s low cost PureBeta ETF lineup will help Schwab leapfrog into fourth place among ETF firms. 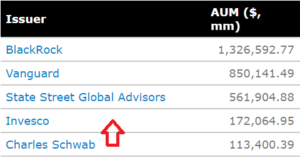 3) Goldman Sachs gets aggressive.  Goldman is currently the 17th largest ETF provider.  With only 16 ETFs and $10 billion in assets, Goldman hasn’t aggressively pursued an ETF business strategy.  Goldman does have a history of undercutting other ETF issuers on price, offering their “smart beta” U.S. Large Cap Equity ETF (GSLC) for 0.09%.  Goldman stood quietly this year while long-time rival JPMorgan vacuumed-up over $14 billion in new assets, primarily from a low cost suite of index-based ETFs.  Goldman’s setup is similar to JPMorgan in that they have built-in distribution and a blue-blooded pedigree.  JPMorgan had a banner year offering low cost core ETFs.  No reason Goldman can’t do same. 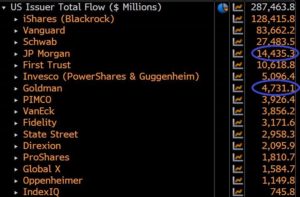 4) ETF intellectual property becomes a story.  A major challenge facing smaller, entrepreneurial ETF startups is that larger fund companies can simply pickoff their best ideas.  New ETF firms put blood, sweat, and tears into bringing innovative ETFs to market and if they have any level of success, larger firms move in and launch highly similar strategies at lower price points (because they have scale and distribution).  Investing is the ultimate copycat sport (think about how many investors try to replicate Warren Buffett).  In the short-run, ETF imitation is good for investors who receive lower costs.  However, in the long-run, what happens to ETF innovation if there’s no incentive for smaller firms to create?  Remember, without investment innovation, we would all still be investing in loaded, actively managed mutual funds or paying $100 commissions to buy stocks from the “Nifty Fifty”.  I don’t have the answers here.  Maybe it just comes down to ethics.  I don’t expect this to change, but I do think this topic makes headlines in 2019.

5) ETFs continue raking-in assets.  Naysayers claimed ETF growth was simply the result of a long-running bull market.  However, in a year where nearly every major asset class is posting negative returns, ETFs will end-up with their second-best haul ever, taking in over $300 billion.  The battle cry from underperforming active mutual fund managers has been “just wait until markets go down!”.  Well, during the recent correction (now bear market), less than 35% of active mutual fund managers are outperforming.  Whoops. 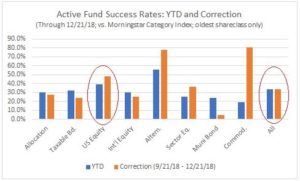 A key ETF growth catalyst was investors feeling letdown or even misled following the 2007-09 global financial crisis.  Investors were told high fees paid to active managers were worth the downside protection they would receive.  When less than half of active managers outperformed during this period, investors had enough and fled to lower cost, index-based ETFs.  Particularly if the market environment remains tumultuous, expect more of this in 2019… 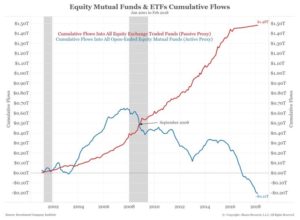