A look back at some of my favorite ETF charts and pictures from the first half of an eventful 2020.  Enjoy!

ETFs in Pictures I

As always, let’s start with a quick look at ETF growth.  Despite the Covid crash, U.S.-listed ETF assets are currently hovering near record highs with over $4.5 trillion.

While ETF innovation is alive and well – particularly among the smaller ETF issuers – the industry is dominated by the “Big Three”. 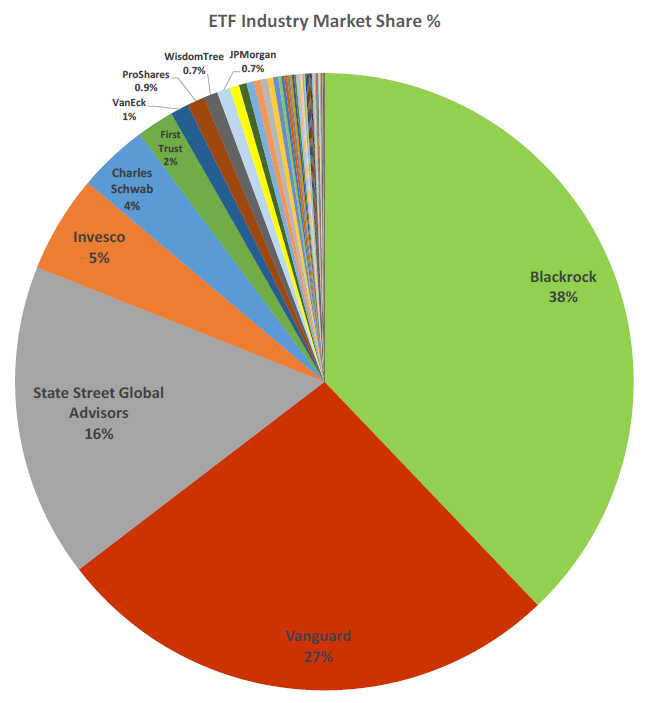 Prior to the Covid crash, the early leader in the clubhouse for 2020’s ETF story of the year was State Street converting their SPDR Portfolio Large Cap ETF (SPLG) to track the S&P 500.  Nearly 27 years after launching the first ETF – the SPDR S&P 500 ETF (SPY), State Street rolled out a lower cost, miniature version.

Notably, iShares recently celebrated the 20th anniversary of their Core ETF lineup by chopping fees on three popular ETFs, including the iShares Core S&P 500 ETF (IVV).  SPLG and IVV are currently tied with Vanguard’s S&P 500 ETF (VOO) for the lowest cost S&P 500 ETF.  SPY, a preferred liquidity vehicle for traders and institutional investors, clocks in with a fee of 0.0945%.

And Then… February’s Market Turmoil Ushered in Several ETF Stories

The top ETF story in 2020 involves the world’s largest oil ETF, the United States Oil Fund (USO).  A combination of diminishing oil demand resulting from the Covid shutdown and too much supply (with nowhere to store it) sent oil prices into a tailspin.  The May 2020 West Texas Intermediate oil futures contract actually went negative! 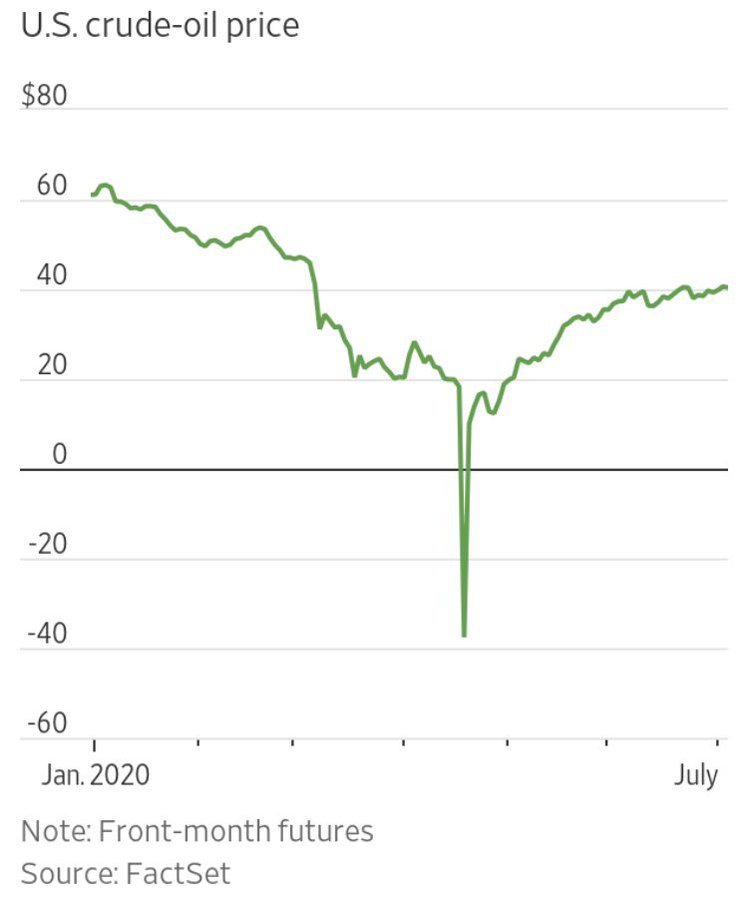 Bottom-Fishing… in an Oil Well

Naturally, some investors attempted to play an oil rebound.  As USO dropped 80%+, Robinhood traders (more on them later) piled in.

“Contango and Too Much Cash”

USO wasn’t designed to track the spot price of oil (no investment does this).  Instead, USO holds front month futures contracts (or at least it did).  Investors plowing money into the fund created a host of issues with managing those futures.  While USO held no May contracts when they went negative on April 20th, the fund was forced to alter its portfolio to accommodate record inflows and extraordinary oil market conditions.

On the heels of the USO situation, a coalition of six ETF issuers, including “The Big Three”, put forth a controversial proposal to better label exchange traded products.  The hope is that new labeling might prevent some retail investors from getting burned by Exchange Traded Products they don’t fully understand. 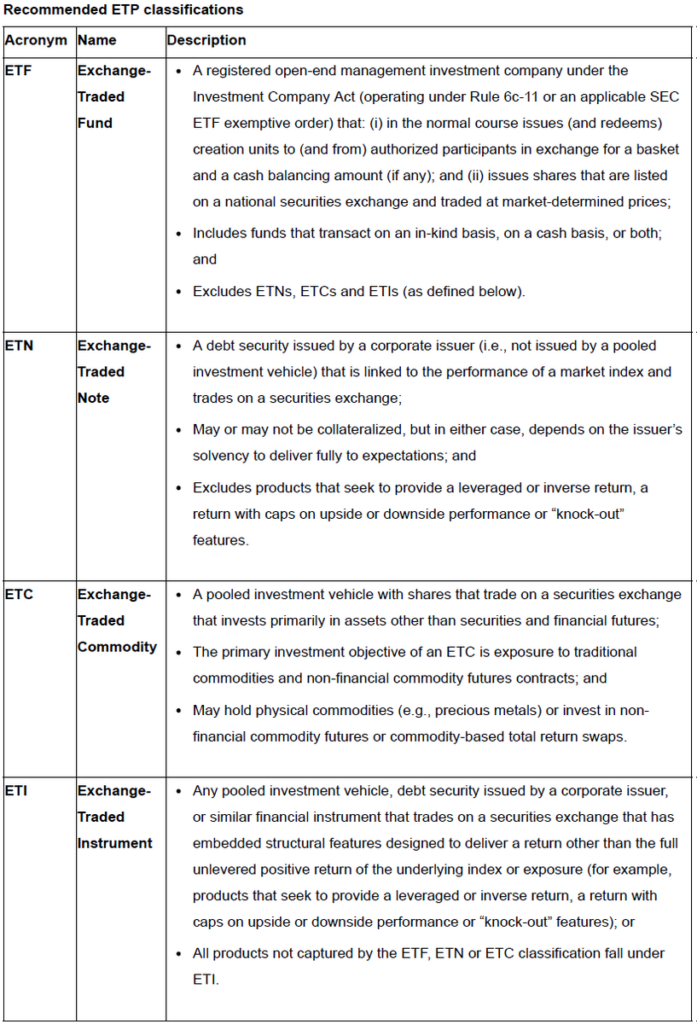 If USO isn’t the ETF story of the year so far, then bond ETFs are.  When the Covid crash hit, bond ETFs faced their biggest challenge since launching in 2002.  Several of the most popular bond ETFs traded at meaningful discounts to their net asset values, sparking debate over whether the products were broken or, instead, a better representation of the true value of the underlying bonds held.

Fed to the Rescue

With the bond market teetering on the brink, the Federal Reserve announced a series of programs designed to inject liquidity and quell investor fear, including direct purchases of bond ETFs for the first time ever.

Based on their most recent data release, the Fed has purchased about $8 billion in bond ETFs and is now a top 5 holder in most of their ETF positions.  Notably, BlackRock is managing the Fed’s program.

With the Fed dabbling in bond ETFs, some are wondering if stock ETFs might be next.  This wouldn’t be the first time a central bank engaged in stock ETF purchases.  The Bank of Japan currently owns a mind-boggling nearly 80% of the country’s ETF assets. 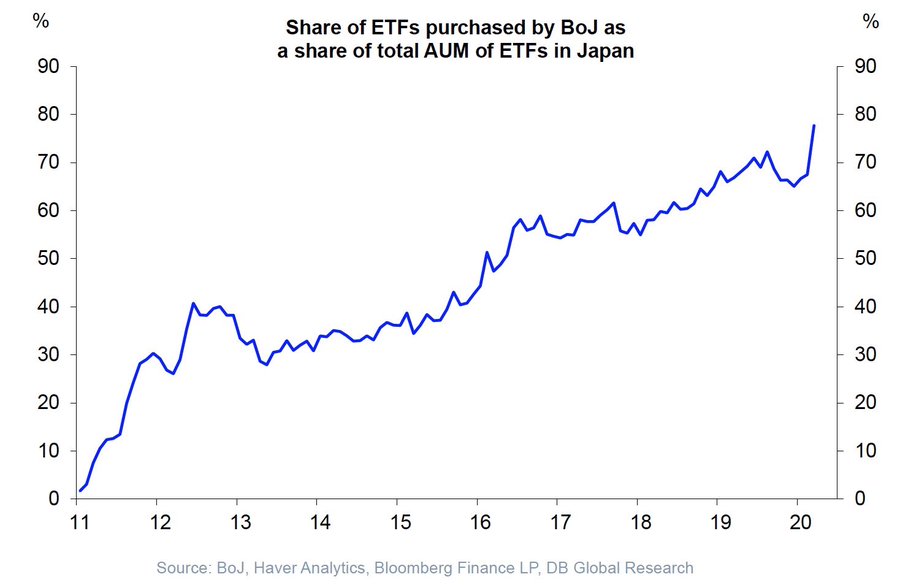 Perhaps the biggest beneficiaries of the Fed’s intervention in the bond market were mutual funds.  A narrative over the past several years was that ETF investors would rush for the exit during a market crisis, causing a “death spiral”.  As it turns out, mutual fund investors departed in record fashion. 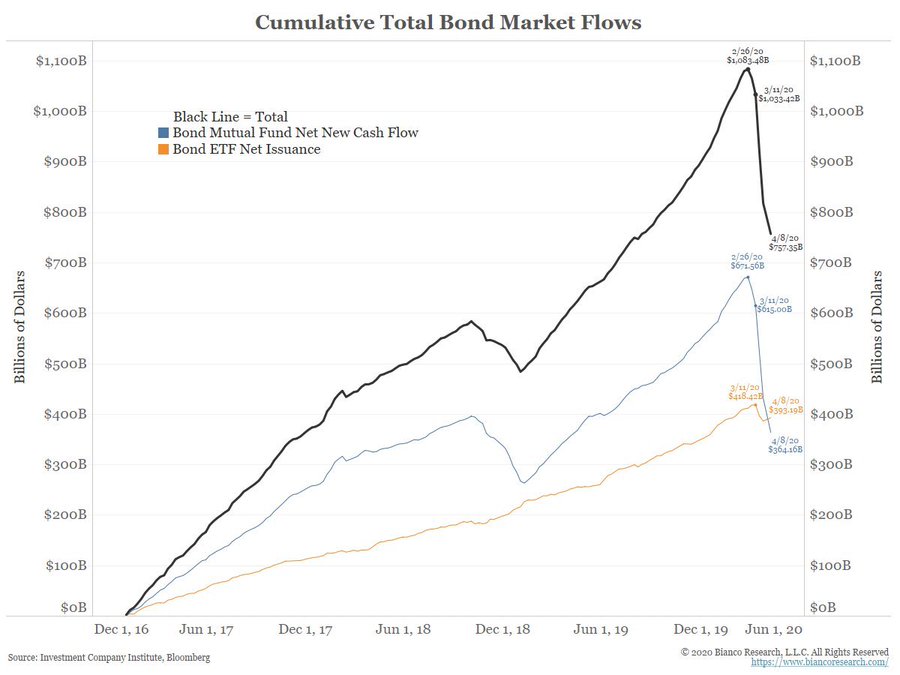 A Vote of Confidence for Bond ETFs

Despite discounts and market turmoil, investors (and the Fed) have poured money into bond ETFs this year.  2020 bond ETF flows are on record pace, set to eclipse last year’s mark.  Bond ETFs held-up in the most difficult of environments, boosting confidence in the structure. 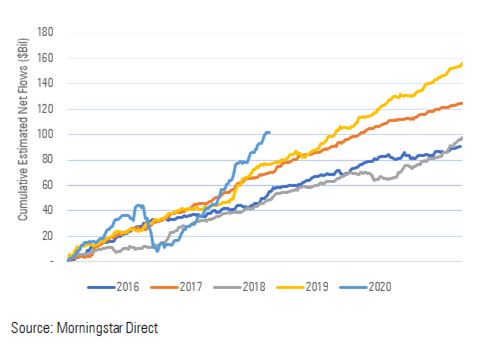 Partially driven by Robinhood traders, the US Global Jets ETF (JETS) took flight in the first half of 2020 with 70 straight days of inflows (3rd best ETF inflow streak of all-time).  The ETF topped $1 billion in assets after beginning March with about $35 million! 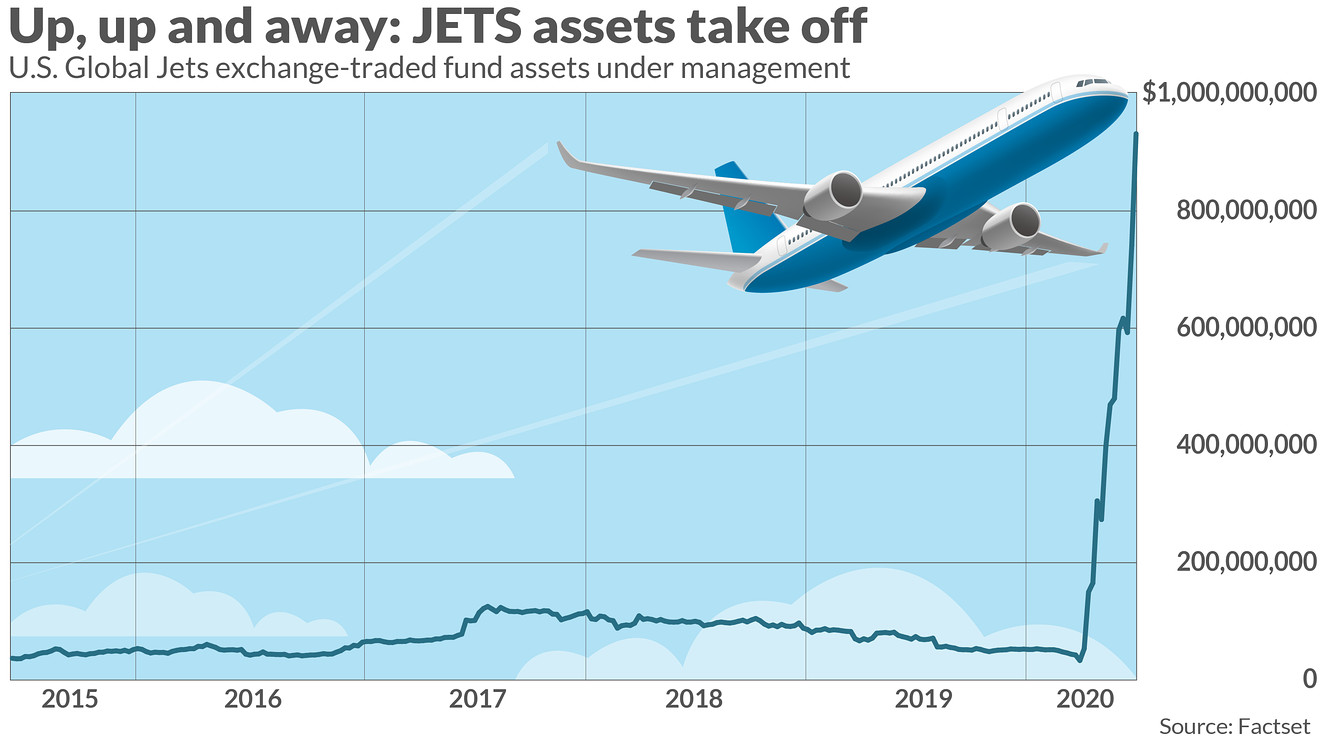 After fortuitously delaying their launch by avoiding the worst of the Covid crash, American Century launched the first non-transparent ETFs.  Legg Mason and Fidelity quickly followed with offerings of their own.  Nearly a decade in the making, non-transparent ETFs hope to leverage the benefits of ETFs (namely tax efficiency, lower costs, and intraday trading) while still protecting the “secret sauce” of active managers.

The market leaned heavily on ETFs during the height of the Covid crash.  Instead of ETFs exacerbating market declines, they acted as shock absorbers by providing a liquidity buffer.  ETFs experienced record trading volume and functioned like the release valves they were originally intended as.

Primary market activity represented a small fraction of overall stock and bond trading during the Covid crash, an indication that ETFs weren’t exacerbating the market declines. 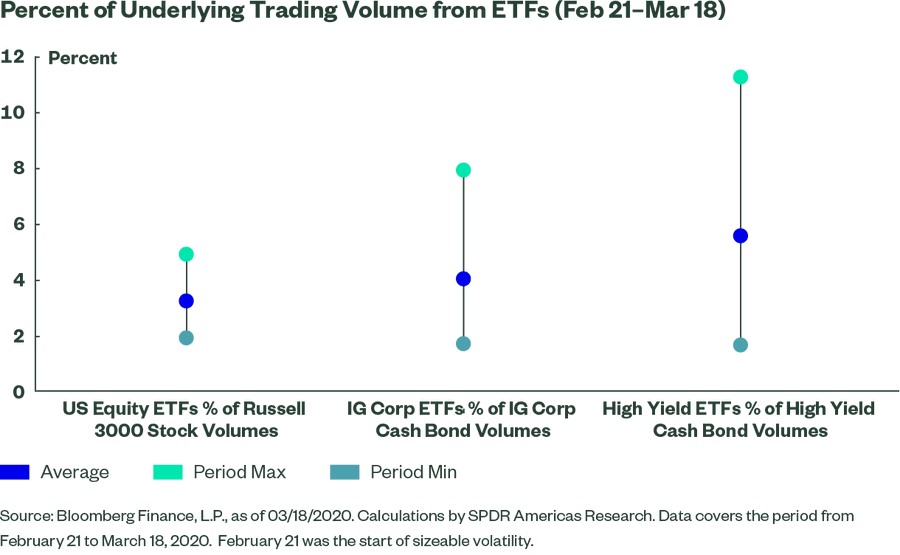 Following the 2008 global financial crisis, ETF inflows accelerated while active mutual funds hemorrhaged cash.  A similar story played out on a smaller scale following the 20% stock market decline in the fourth quarter of 2018.  Will 2020 follow suit? 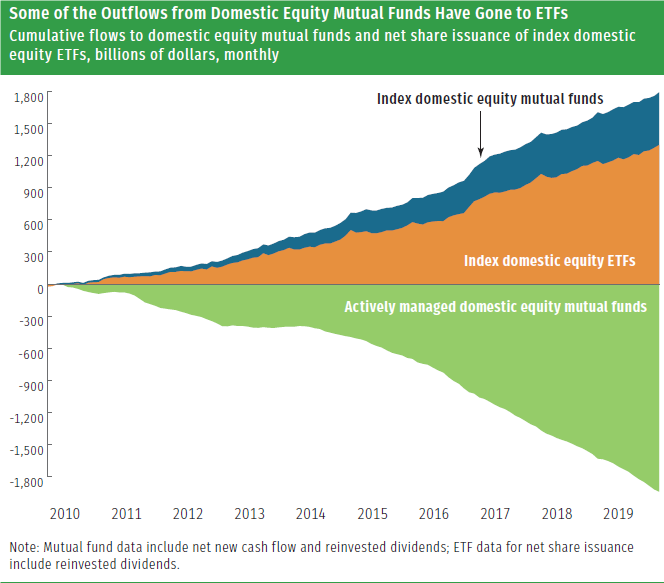 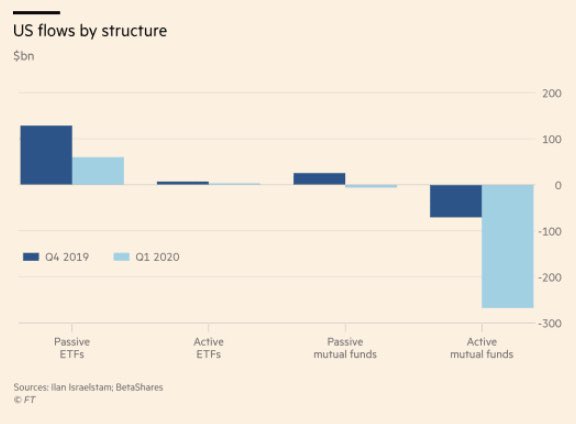 Why Does This Happen?

Two reasons:  1) Investors realize their expensive mutual funds failed to protect them from the downturn (in fact, many actually underperformed), and 2) When investors are sitting on sizable gains, they’re hesitant to sell and take a tax hit.  With stocks down substantially, it provides an opportunity to remove the mutual fund capital gains padlock.  Investors can sell expensive, underperforming funds without paying Uncle Sam.  This money then flows into lower cost investments such as ETFs.

Vanguard ETFs took in nearly $90 billion dollars in the first half of 2020.  The drivers?  A combination of Vanguard investors methodically putting money to work during the crisis and the company allowing investors to switch out of their slightly higher cost mutual fund versions. 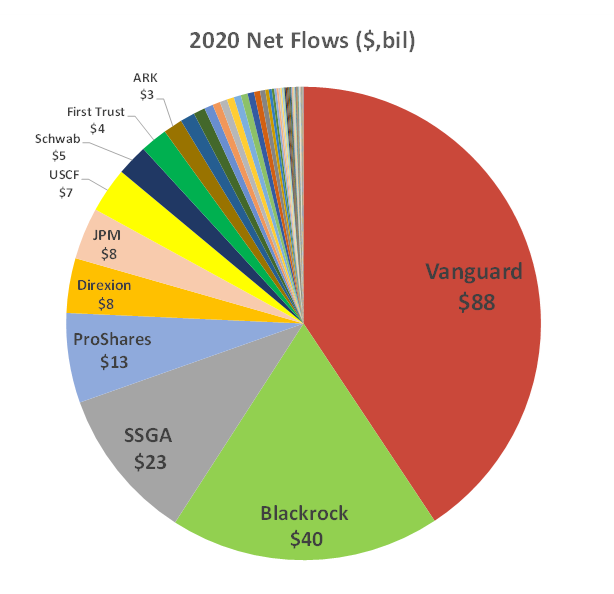 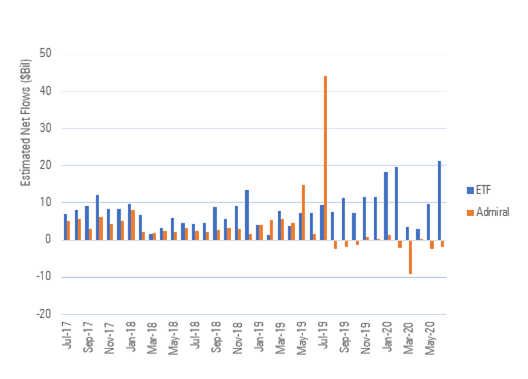 While Vanguard vacuums-up assets with their low-cost approach, that hasn’t stopped other issuers from attempting to compete.  BNY Mellon made a splashy ETF entrance in April, launching the first zero fee stock and bond ETFs with no fee waivers or other restrictions.

There is a tug-of-war between fees and value.  Investors are realizing that if they’re getting something for free, they’re not the customer – they’re the product.  Fund companies are weighing whether to compete as a low-cost provider or a differentiator (and if they don’t differentiate, then they’re a commodity and will be priced accordingly even if not intending to compete in the low-cost space). 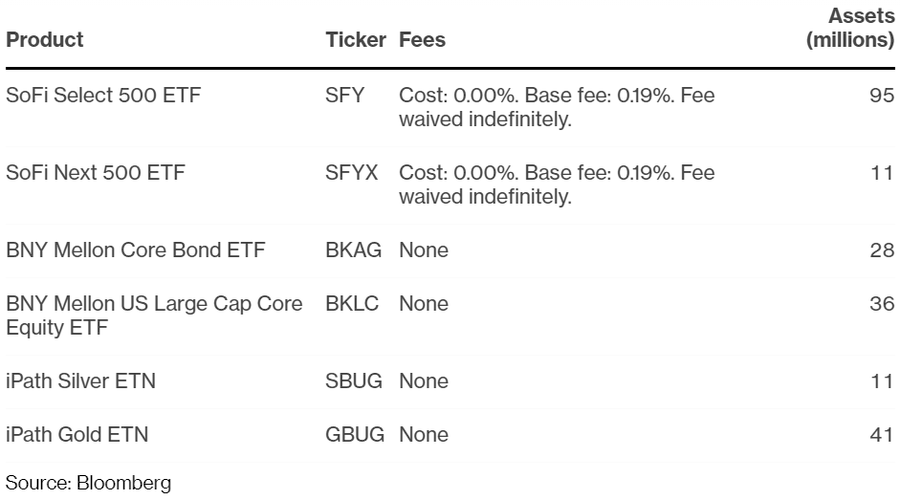 Rise of the Retail Trader

While not necessarily an ETF-related story, the Coronavirus situation resulted in the rise of retail trading.  A combination of more people working from home or out of work, government stimulus checks, no sports/sports betting, zero trading commissions, and fractional shares has younger investors dabbling in stocks and ETFs. 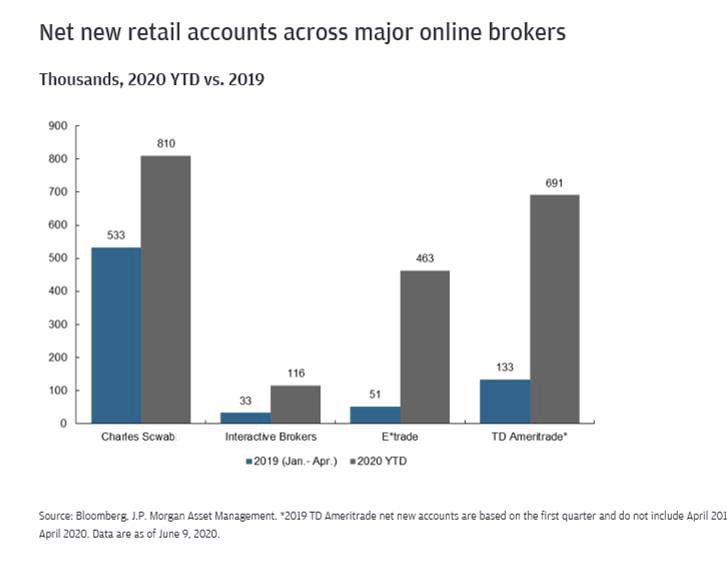 It’s difficult to pinpoint the exact reasons for the rise in retail trading, but the major brokerages shifting to commission-free trading last year is clearly a driver. 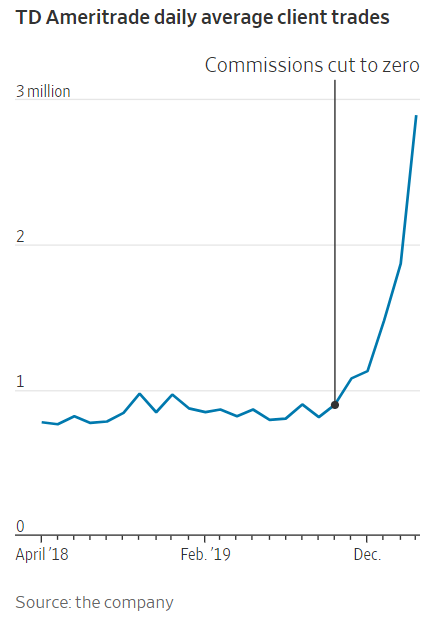 Donkey Kong, But For Investing

No brokerage platform embodies the rise of retail trading like Robinhood.  They perfected gamifying investing, making it feel more like playing Donkey Kong than risking hard-earned money.  This poses some real concerns around the behavioral side of investing, but is also helping get new investors interested in stocks and ETFs.  The top 10 ETFs held at Robinhood… 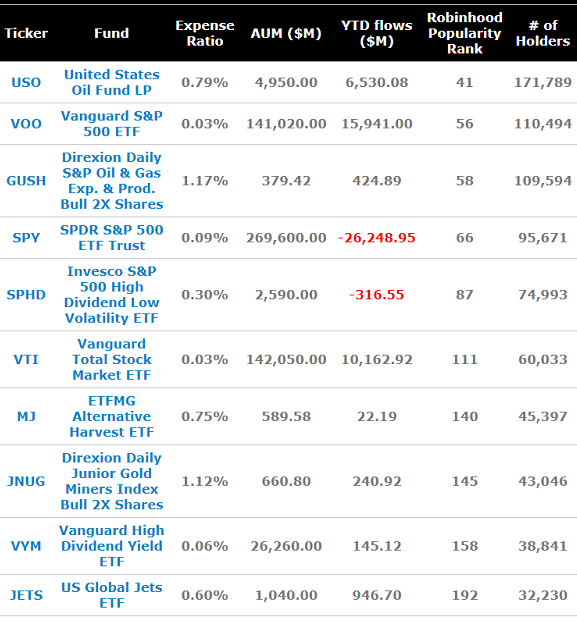 A top 20 ETF holding at Robinhood was the VelocityShares Daily 2x VIX Short-Term ETN (ticker TVIX).  TVIX was delisted on July 3rd, with over 21,000 Robinhood users still holding it.  This highlights the access a platform like Robinhood provides (which has benefits) and potential risks that access poses. 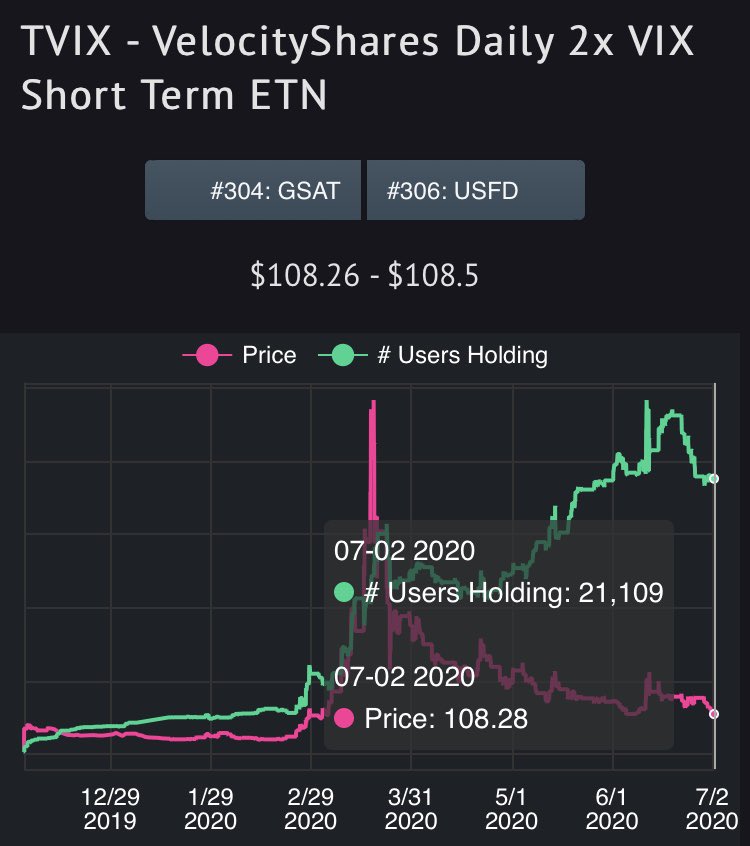 Robinhood dominated financial media coverage in the first half of 2020, though the impact of Robinhood investors on markets appears minimal. 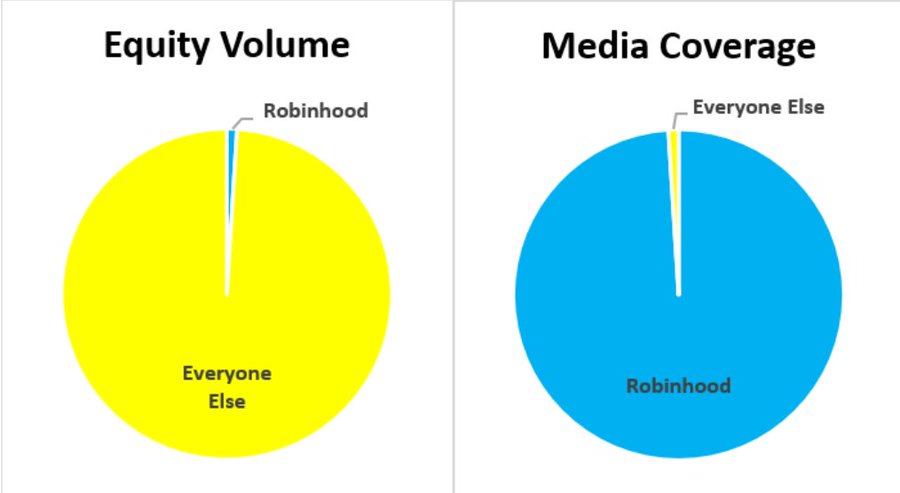 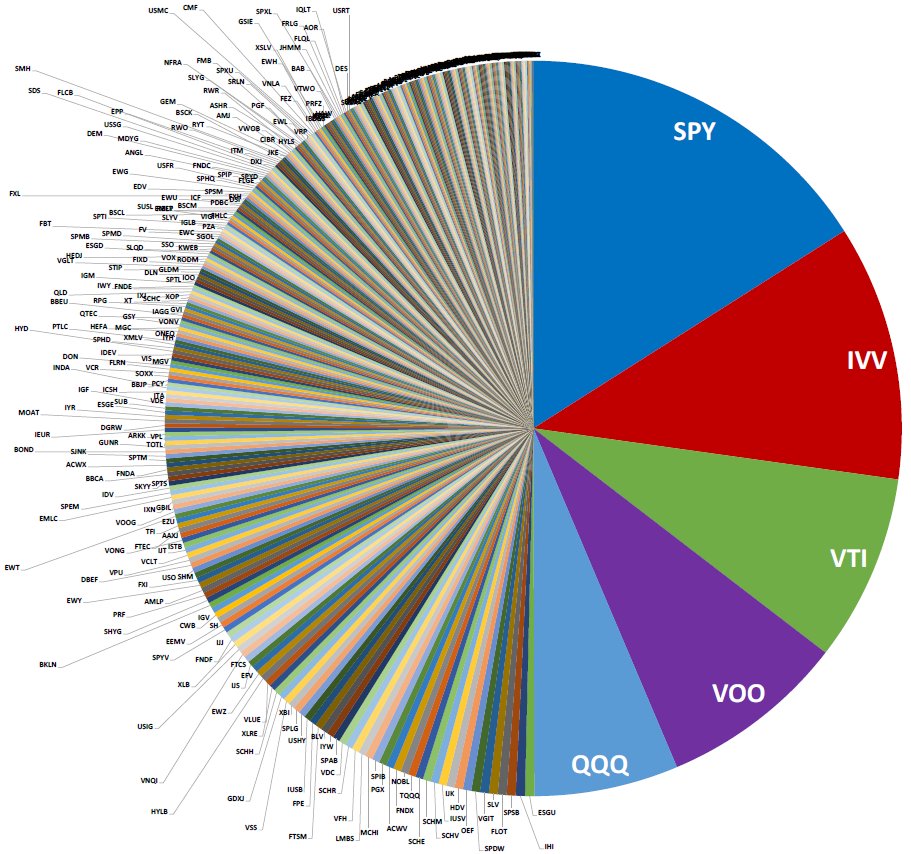 The SPDR Gold Shares (GLD), currently the 8th largest ETF with around $70 billion, might be next to join the $100 billion club.  Gold ETFs have shone brightly this year, already taking in more money than their all-time annual record with investors looking for a safe haven or diversifier. 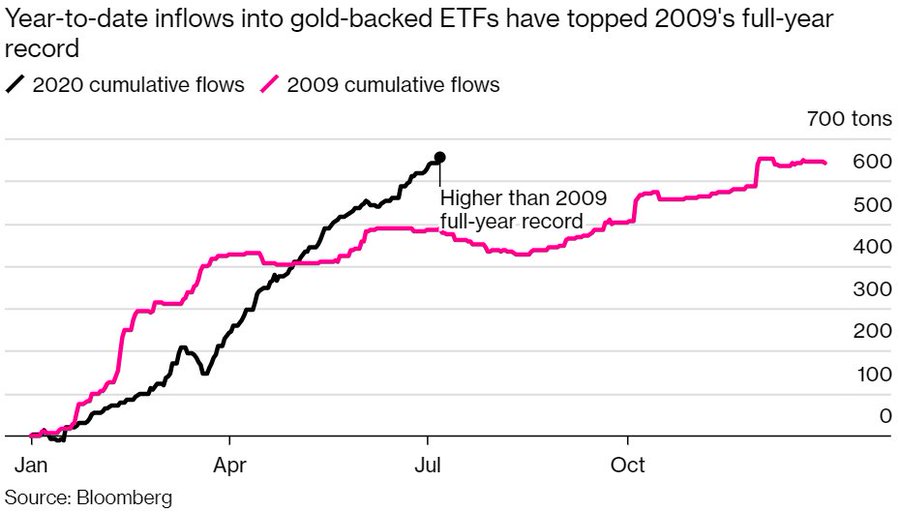 Can ETFs Top Half a Trillion Net Inflows?

In the end, despite this unprecedented (yes, I’m using that word) market environment and time in our lives, it was a highly successful first half of 2020 for ETFs.  Some industry observers believe inflows could reach a half a trillion dollars for the year. 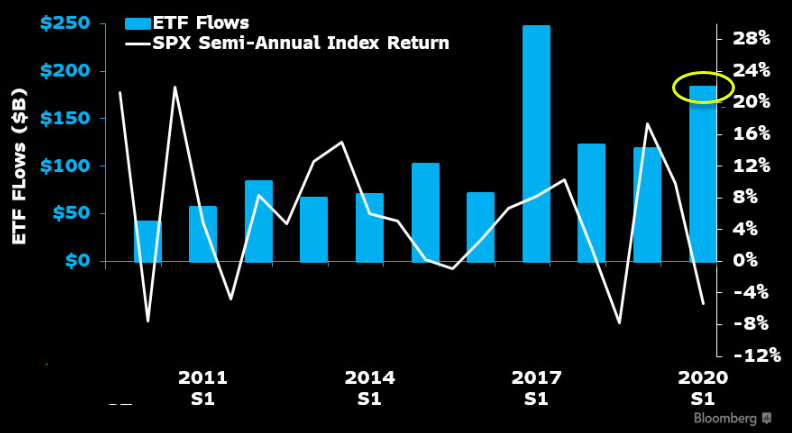 Where Exactly Are Investors Placing Their $$$? 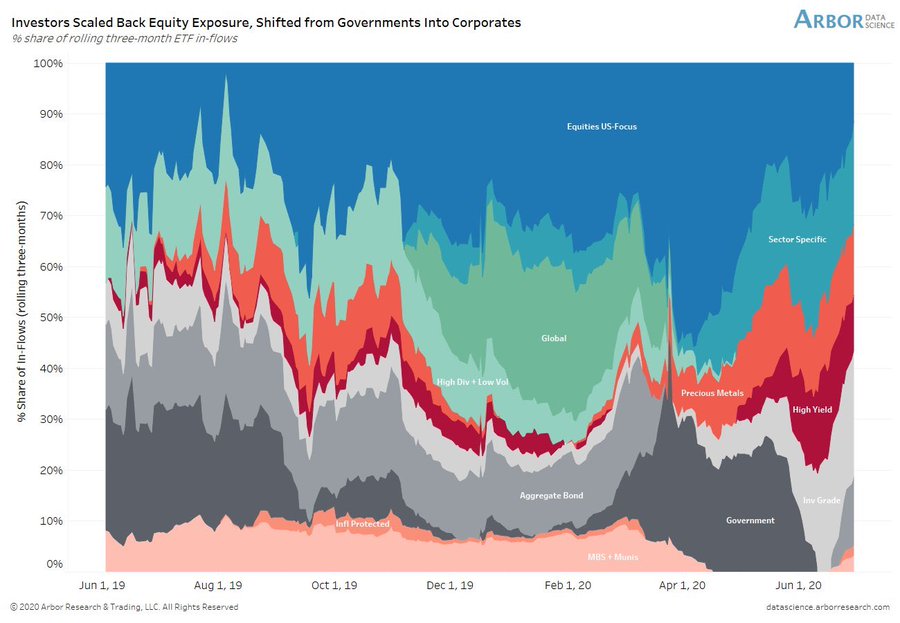