This week, a group of six ETF issuers announced an initiative to better label exchange traded products.  The coalition includes iShares, Vanguard, and State Street (the “Big Three”, who control 80%+ of the ETF market), along with Invesco, Schwab, and Fidelity.  The basic idea is that not every product should be called an “ETF”.  Instead, some should be labeled differently to reflect their “structural features” and risks, which might better inform investors. 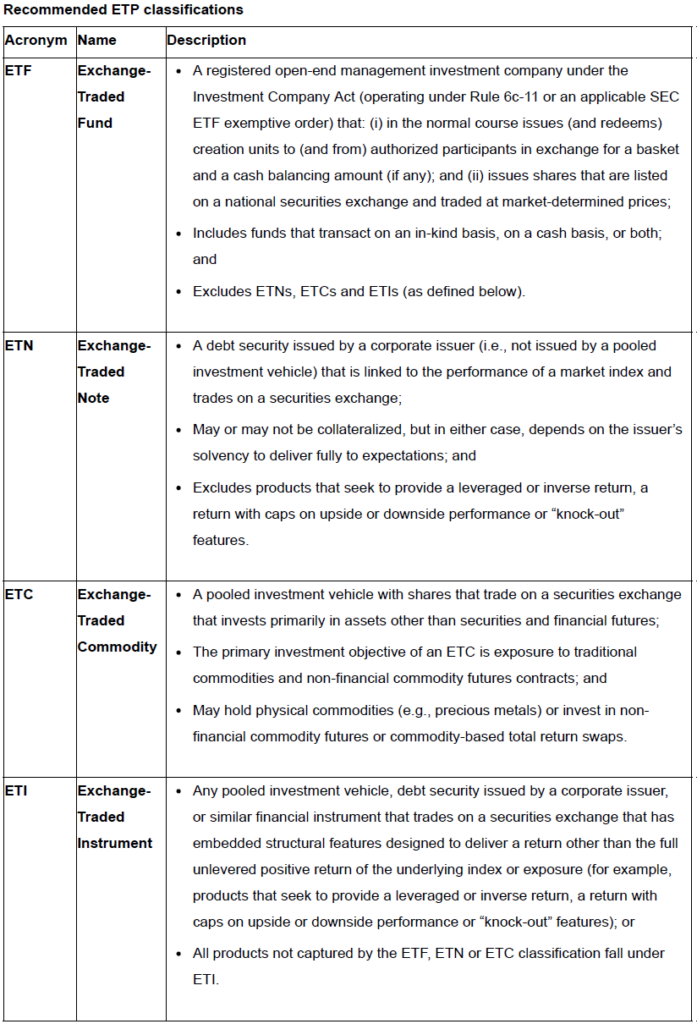 Under the proposal, ETF issuers would rely on stock exchanges (Cboe, Nasdaq, NYSE) to implement these labels.  Since ETF issuers must apply to have products listed on an exchange, the thought is this would be a natural point of “enforcement”.

This isn’t new.  iShares, the largest ETF issuer, pushed for better labeling several years ago and even attempted to include a similar proposal as part last year’s ETF Rule, which cleaned-up the ETF regulatory framework.  In a 2018 comment letter to the SEC, iShares laid out their case by citing the VelocityShares Daily Inverse VIX Short Term ETN (XIV):

“The equity market sell-off and heightened volatility during the first week of February 2018 highlights the different risk profiles associated with different types of ETPs. Specifically, a steep drop in equity benchmarks on February 5, 2018 coincided with the largest one-day percentage increase ever recorded in the VIX level. During the week of February 5th, ETFs experienced more than $1 trillion in US-listed exchange trading volume, roughly double normal trading volumes. This episode demonstrated the resilience of the traditional ETF market in a time of market stress. However, after the closing bell on February 5, 2018, several inverse VIX ETPs suffered declines in excess of 90%. These price declines reflected the embedded economics of these ETPs, as a fall in the VIX increases the value of the inverse ETP while a rise in the VIX decreases the value of the ETP. In our view, this episode highlights the need for clearer labeling of ETPs in order to make sure investors understand that certain ETPs have greater embedded risks and more complexity than others.”

Ultimately, the SEC passed on including this proposal in the Rule.

ETFs have been a boon for investors by offering lower costs, greater tax efficiency, more transparency, trading flexibility, and easy access to nearly every asset class or strategy.  It’s the last point which is the driving force behind this labeling proposal.  As the ETF universe has ballooned, complexity has also increased.  With nearly 2,400 products available, every investor can now buy anything from oil futures to leveraged products to volatility, all with the click of a button.  Predictably, that’s led to some retail investors getting burned, the most recent example being the United States Oil Fund (USO).  It’s important to note products such as XIV and USO functioned properly.  The problem is some investors didn’t understand the risks.

From the perspective of ETF issuers, a bad experience for investors – even if the products did what they were supposed to – might negatively impact future business.  Try googling “XIV” or “USO” and you’ll see an endless stream of scary stories about how ETFs have blown-up Grandma.  iShares and other issuers don’t want these stories dissuading Grandma from buying say, the iShares S&P 500 ETF (IVV).  The bottom line is some issuers want to avoid having a few products give the entire industry a black eye.

So, where do I stand?  I applaud this new initiative and actually suggested this be considered in the wake of the USO debacle:

A couple yrs ago, BlackRock proposed better labeling for exchange traded products. Idea was that everything shouldn’t be called an “ETF”. In light of $USO (& $XIV, etc), wonder if this shouldn’t be given more consideration.

No doubt a small step, but anything to help… pic.twitter.com/I9ycJk2YZX

I also said BlackRock’s proposal was a step in the right direction two years ago… which is why I have been somewhat surprised to see the broader ETF industry’s reaction to this now.  I would characterize the overall response to the latest initiative as lukewarm at best.

It seems the biggest concern is this might further unlevel the playing field in an already top-heavy industry.  A decent chunk of products that would be labeled “ETN”, “ETC”, or “ETI” come from smaller issuers.  The CEO of Innovator ETFs, who pioneered the highly successful defined outcome ETFs, recently told MarketWatch:

“This is just really big companies coming together to try to squeeze out competition and build wider moats.  It’s un-American.”

Under the new proposal, Innovator’s defined outcome ETFs would be labeled “ETIs”.  The fear is that being labeled “ETI” or “ETC” might cause further gating at brokerages and other distribution platforms, which is already an (unfair) disadvantage for smaller issuers.  In other words, if a product is labeled “ETI”, brokerages might exclude that product from being offered to investors altogether or, at a minimum, place warnings that dissuade buying.  But, ISN’T THAT THE POINT??  If an investor wants to directly trade options or oil futures or open a margin account, they have to go through an approval process.  Why should it be easier to trade oil futures ETFs or leveraged ETFs?

Look, I’m a huge fan of Innovator’s defined outcome ETFs.  But the fact is, they hold a customized basket of FLEX options based on price indexes and have some complexities.  Go poke around on Innovator’s website.  You’ll find interactive pricing calculators, lengthy FAQs, and other learning tools.  Innovator has done a remarkable job on education.  Why?  Well, they have a disclosure front and center on their home page:

“The funds have characteristics unlike other traditional investment products and may not be suitable for all investors.”

Unlike other traditional investment products.  If being labeled an ETI causes some investors to hit the pause button and explore Innovator’s website, isn’t that a good thing?

Maybe I’m naïve, but I don’t view this labeling initiative as some nefarious plan to shut out smaller issuers.  There’s a much bigger problem within the industry, which is that larger issuers can simply rip-off the best ideas of smaller issuers.  I’ve written about this previously:

“A major challenge facing smaller, entrepreneurial ETF startups is that larger fund companies can simply pickoff their best ideas.  New ETF firms put blood, sweat, and tears into bringing innovative ETFs to market and if they have any level of success, larger firms move in and launch highly similar strategies at lower price points (because they have scale and distribution).  Investing is the ultimate copycat sport (think about how many investors try to replicate Warren Buffett).  In the short-run, ETF imitation is good for investors who receive lower costs.  However, in the long-run, what happens to ETF innovation if there’s no incentive for smaller firms to create?  Remember, without investment innovation, we would all still be investing in loaded, actively managed mutual funds or paying $100 commissions to buy stocks from the “Nifty Fifty”.  I don’t have the answers here.  Maybe it just comes down to ethics.”

If a smaller issuer develops a value-added product that shows some success AND it’s called an ETI under the proposed naming convention, believe me when I tell you that larger issuers won’t hesitate to copy it.  My point is that smaller issuers’ animosity towards the larger providers (which I think is warranted in some cases) shouldn’t trump their desire to support solutions that might protect retail investors and help the industry’s overall reputation (which benefits smaller issuers too).

And, oh by the way, guess who has 6 of the 10 largest commodity ETFs, which would be labeled “ETCs” under the new proposal?  Um, iShares, State Street and Invesco, three of the issuers supporting the proposal (if you’re curious, the six ETFs are GLD, IAU, SLV, GLDM, PDBC, & DBC).  Let me get this straight:  the larger issuers are “sacrificing” these products, so they can increase their already ridiculous market share?  I don’t think so.

A few other concerns that have been raised, along with my quick take:

-Various ETF ratings already exist to help investors make informed decisions.  I disagree with this in the sense that the most robust and helpful rating systems are behind paywalls and not readily available to retail investors.  Are retail investors going to buy a Bloomberg terminal to access the traffic light rating system?  There are a handful of helpful free resources, but there is also a lack of standardization around these ratings (which you can read about here).  Most importantly, these ratings aren’t available at the point of purchase, whereas an investor will see “ETC” or “ETI” before they mash the buy button at their broker.

-Labels will lead to more investor confusion.  Disagree.  There’s no question the ETF industry already has way too much jargon: smart beta, ESG, non-transparent, the list goes on.  But the proposed labels would be viewed at the point of purchase.  Even if an investor doesn’t understand what “ETI” means, they might see that it’s different than “ETF”.  Not game-changing, but every little bit helps.

-This proposal belongs with the SEC.  Agree.  Going through the exchanges feels like an end-around.  The SEC would have the ability to develop consistency around implementation and properly enforce compliance.

-The coalition behind this proposal isn’t inclusive enough.  Agree, with a caveat.  The largest players in any industry naturally take on a leadership role.  In this case, the five largest ETF issuers are all on board.  I think that’s a good thing as this proposal goes nowhere without them supporting it.  That said, this was a missed opportunity for the larger players to build some goodwill and acknowledge that smaller issuers are a critical cog in the industry’s success (largely because that’s where the innovation occurs).  That said, there’s a realistic limit here.  Too many cooks in the kitchen and nothing gets done.

-It’s too late.  Disagree.  ETF Trends’ Dave Nadig essentially came to this conclusion.  To dovetail on his thought process, you’re reading this at ETF Educator, I host ETF Prime, and run The ETF Store.  His point is that “ETF” is ubiquitous – like Kleenex or Frisbee.  The media and everyone else will still call every product an ETF.  I probably will too.  However, when investors actually go to place a trade and see their product called something different, maybe they will pause.  I don’t think it’s too late.  The industry should always strive to do more.  If a different naming convention prevents a few unwitting retail investors from blowing themselves up, isn’t that a step in the right direction?

To be clear, I certainly don’t view this labeling proposal as a panacea.  Under this proposal, 96% of ETF assets and 77% of products would still be labeled as “ETFs”.  Plenty of those ETFs have substantial risks which require meaningful due diligence from investors.  I also think fund companies should do a better job labeling their own products.  For example, the United States Oil Fund should be called the United States Oil Futures Fund.  But I do think this latest proposal has merit.  If nothing else, it’s sparking a healthy conversation around elevating ETF investor knowledge and education.  That’s a win for everyone.