“The number one problem in today’s generation and economy is the lack of financial literacy.” – Alan Greenspan, former Federal Reserve Chairman

Ten years ago this month, the country was mired in the worst financial crisis since the Great Depression.  Lehman Brothers filed for bankruptcy, Bank of America was pressured to purchase Merrill Lynch, the government seized control of Fannie Mae and Freddie Mac, AIG accepted a federal bailout, and the stock market was down 20% – on its way to bottoming out in March 2009, down nearly 55% from its previous highs.  Of course, since September 2008, stocks are up nearly 210% – which is why I spit out my coffee when I recently came across this in Barron’s:

“Of the 2,000 people who recently took a survey commissioned by robo-advisory firm Betterment, 48% thought the stock market had not gone up at all in the past 10 years, while 18% actually said it had gone down.”

How in the world is it possible 66% of people in this survey believe stocks are either flat or down over the past ten years?!?  Certainly, psychological scars from the financial crisis are part of the answer.  After losing 55%, a number of investors simply took their ball and went home.  They felt the market was rigged against them.  Bankers were bailed out and they were left holding the bag.  These investors likely checked out of the stock market and haven’t been paying attention to any gains since.  However, I believe there is a larger and much more concerning reason people are unaware stocks have surged ahead:  a lack of financial literacy.

According to Next Gen Personal Finance, a nonprofit organization that offers personal finance curriculum to teachers, the vast majority of high school students receive no financial education:

“Only 16.4% of the 13 million high-school students across the country in 2017 were required to take a personal-finance course to graduate. Excluding the five states that mandate a personal finance course that figure drops to 8.6%.”

In a study conducted last year, the Program for International Student Assessment found that only 12% of 15-year olds scored at the highest level of financial literacy, and 22% scored below the baseline level of proficiency.  If you don’t learn personal finance basics in school, it’s difficult to pick them up later in life which is why S&P Global found just 33% of adults show an understanding of basic financial concepts.

The implications are many people simply don’t understand the ABCs of stocks and investing.  If you don’t understand something, you tend not to pay attention to it.  It’s why I don’t watch hockey.  Never played it, don’t know the rules.  I couldn’t tell you what “icing” is or what constitutes “offsides”.  TheKnowledgeAcademy.com and polling firm YouGov recently conducted a survey on financial terms Americans said they were least confident in the meaning of: 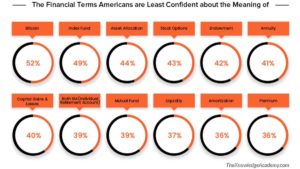 I won’t fault anyone for not understanding “bitcoin”, but “index fund” and “asset allocation” are two terms every investor should know like the back of their hand.  This shocked me almost as much as the survey in Barron’s.  But, again, if you are not taught something or involved with it directly, it’s pretty tough to learn and get excited about.  Add to this that many people, especially Millennials, are focused on the basics – paying bills, managing student loan debt, trying to figure out how to purchase a home – and you have the financial equivalent of “Maslow’s hierarchy”, where people are simply trying to take care of their most fundamental needs.  Focusing on stocks and investing just isn’t a priority.

In an ironic twist, while I believe a lack of financial literacy has contributed to investors missing out on generational returns they may never see again, I would also argue a lack of basic personal finance skills was a main culprit in causing the financial crisis to begin with.  There were certainly many responsible parties to the financial meltdown, from unscrupulous mortgage lenders to overleveraged banks and rubber-stamping credit rating agencies.  But the fact is people were buying houses they couldn’t afford with loans they didn’t understand and tapping equity in those houses to buy things they didn’t need (remember all those Hummers on the road in 2006-07?).  The mindset was home prices could never go down and a house could serve as a piggybank.  On top of that, while things were good, people weren’t saving enough money.  As the recession took hold, people lost jobs, and there was no rainy-day fund to fall back on.  There was no home equity to tap because homes were upside-down relative to mortgage balances.  Mix in overly aggressive investment portfolios – people not investing in a prudent, diversified manner – and you had a recipe for disaster.

To me, this was a culmination of a lack of personal financial education in our schools over a prolonged period of time.  Think back to the courses you took growing up.  Art, chemistry, auto shop, biology, music, etc.  Unless you operate in a profession relying on these as a foundation, when was the last time you actually used anything learned from these subjects?  I would go so far as to include algebra, geometry, and calculus here as well.  However, basic personal finance skills?  Do you have a mortgage, car loan, credit cards, and/or student loan debt?   Do you have income and need to budget the money you spend daily?  What about saving for retirement and putting together an investment portfolio?

Outside of reading, writing, and basic math, I would argue nothing else is utilized more in daily life than personal finance skills.  It’s not that subjects like art and music aren’t an important part of the overall learning experience, but shouldn’t we first teach kids skills we know will be leveraged on a daily basis?  It’s mind-boggling to me.  Ask yourself whether a lack of art or music knowledge caused any of these:

-Stress in any relationship

Money issues are the leading cause or a meaningful factor in each of the above.  A survey conducted by the American Psychological Association found 72% of Americans reported feeling stressed about money at least some of the time during the past month. 22% said they experienced extreme stress about money during the past month.  In March, Northwestern Mutual released the results of their 2018 Planning & Progress Study which found 44% of Americans view money as the dominant source of stress, more than personal relationships (25%) and work (18%).  In addition, 28% said financial anxiety makes them feel depressed at least monthly, with 17% suffering depression as often as weekly, daily, or even hourly.

There’s a saying that money can’t buy happiness.  However, I have an uncle who always rebutted that with, “People who say money can’t buy happiness either have too much or not enough”.  He’s right, which is why the Northwestern Mutual study also found that 87% of Americans agree nothing makes them happier or more confident than feeling like their finances are in order.  I think the underlying problem is very simple – we have an enormous financial literacy issue in our country.  If a lack of personal finance skills can contribute to a financial crisis and cause investors to miss out on generational returns, it’s a problem.  A problem we need to fix now.