The Empire Strikes Back

Earlier this year, I chronicled “Core Wars”, the ruthless ETF fee competition being waged over the core building blocks of a portfolio.  Investors continue plowing money into the lowest cost ETFs, resulting in fund companies battling for those dollars by engaging in a cutthroat race to the bottom on fees.  Using a Star Wars analogy (forgive me and thank Bloomberg’s Tom Psarofagis), I said:

“It’s tough competition to rule the ETF galaxy.  The dark side of Core Wars for ETF providers is fee compression.  The light side is they’re using the “low cost” force to pull assets from overpriced actively managed mutual funds and other expensive investments.  New assets help offset their lower fees.  The end game in all of this is unclear.  The only clear winners at this point are investors, whose destiny is unbelievably low cost portfolios.”

Continuing with the analogy, I suggested either iShares or Vanguard were the Evil Empire and fund companies like State Street, Invesco, and Charles Schwab were the rebels, just trying to survive.  I may have had that wrong.  Enter JP Morgan, who built the original asset management empire (and one some people truly believe is evil because of stuff like this).  After years of basically ignoring the ETF market and watching competitors bring in assets at hyper speed, it appears the JP Morgan empire is now striking back.

Good point, this year the disruptors are getting disrupted by those they disrupted. Fund version of The Empire Strikes Back. https://t.co/WgdsMyJRbN

At the beginning of Star Wars – The Empire Strikes Back, the rebels have taken refuge on the ice planet Hoth.  That is, until the Galactic Empire’s Imperial forces find out where they’re hiding and launch a devastating attack. 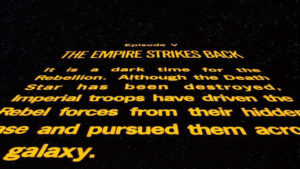 It seems JP Morgan figured out the ETF rebels’ strategy.  In recent weeks, three JP Morgan ETFs have surged past $1 billion, including two of the three fastest ETFs to hit that mark – the JPMorgan BetaBuilders Japan ETF (BBJP) and the JPMorgan BetaBuilders Canada ETF (BBCA).  The only ETF to reach $1 billion faster was the SPDR Gold Shares (GLD).  JP Morgan’s ETF business has grown from $6.2 billion at the beginning of the year to $14.6 billion.

Taking a page out of Core Wars, JP Morgan significantly undercut the largest competing ETFs on price with BBJP and BBCA.  At 0.19%, JP Morgan’s ETFs are less than half the 0.49% cost of the iShares MSCI Japan ETF (EWJ) and the iShares MSCI Canada ETF (EWC).  The third JP Morgan ETF to recently hit $1 billion, the JPMorgan BetaBuilders Europe ETF (BBEU), undercut both the iShares Core MSCI Europe ETF (IEUR) and the Vanguard FTSE Europe ETF (VGK) by a single basis point, 0.09% vs. 0.10%.

What makes JP Morgan’s situation unique is they already have an established financial empire, controlling significant investor dollars through their asset and wealth management arms.  In other words, JP Morgan has a built-in client base and a clone army of advisors and asset managers through which they can reallocate dollars from competing funds to their own.  While fund flows are always noisy, there’s no question that is exactly what JP Morgan has been doing:

JP Morgan is executing what Bloomberg’s Eric Balchunas calls the “BYOA – bring your own assets” strategy.  The galactic empire of JP Morgan allows them to tilt the playing field to their advantage.  For better or worse, investors look at total ETF assets as part of their due diligence process.  ETFs with greater assets tend to beget more assets, along with increased trading volumes.  Not only that, but massive flows into JP Morgan ETFs have been prominently covered by outlets like CNBC, The Wall Street Journal, and Bloomberg, resulting in plenty of free attention.  There’s a virtuous cycle occurring and JP Morgan may just be getting started.  ETF.com estimates JP Morgan holds nearly $80 billion in competitors’ ETFs.  Last week, JP Morgan announced they would be using ETFs in their target date series funds which – get this – hold $75 billion in assets!  A JP Morgan spokeswoman said:

“In addition, the target date funds will only invest in third-party market-cap weighted ETFs when an investment in a JP Morgan passive ETF is not available.”

You can bet that in the not-too-distant future, there will always be a JP Morgan ETF available.  I fully expect JP Morgan to launch an entire core lineup of BetaBuilders ETFs.  It’s not “if”, but “when”.  It also wouldn’t surprise me if JP Morgan becomes the first ETF provider to offer a zero cost ETF.

This week, JP Morgan is rolling out free stock and ETF trades, along with an automated portfolio builder and free access to research for anyone using JP Morgan’s mobile banking app or website.  JP Morgan is also focusing on reducing back-end operating costs.  They recently announced layoffs of around 100 employees in their asset management division.  Mary Callahan Erdoes, Head of JP Morgan asset and wealth management said:

The biggest kicker in all of this?  JP Morgan already has financial ties with half of American households and 47+ million people are currently using JP Morgan’s banking app or website.  That’s a pretty good launching pad from which to market a low cost ETF lineup.  If JP Morgan is finally getting serious about ETFs – and it certainly appears they are – they could be building a new Death Star to obliterate the competition.  “Core Wars” was really about the destruction of the old guard fund companies’ original Death Star – expensive, actively managed mutual funds and other pricey proprietary products.  The JP Morgan empire is striking back by leveraging a vertically-integrated business model with built-in resources and advantages that many competitors simply don’t possess.

As with “Core Wars”, investors reap the benefits as this further pushes costs down across the spectrum of financial services.  However, these benefits come with a potential risk.  Investors need to have their force shields up to prevent being cross/up sold more expensive products.  Remember, nothing is truly free.  The reason companies like JP Morgan and Fidelity can offer low cost ETFs, zero fee index funds, free trades, research, etc., is because they operate highly diversified business models with multiple revenue channels, providing the ability to run loss leaders.  The strategy here is simple:  lure investors in the door by offering cheap or no cost products and services with the hope of upselling more expensive (and profitable) products and services.  If investors can control their own behavior, there’s nothing stopping them from simply taking advantage of the free/low cost offerings.  Otherwise…