Fees on ETFs designed as core portfolio building blocks have plummeted in recent years as a civil war has broken out in the ETF industry.  You might recall the opening crawl from the original Star Wars… 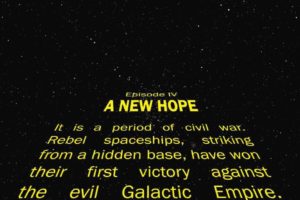 Bloomberg’s Tom Psarofagis recently dubbed this ruthless ETF fee competition “Core Wars”.  Depending upon your view of things, iShares or Vanguard could be considered the Evil Empire and State Street, PowerShares, and Charles Schwab are Rebels attempting to strike a blow for victory (I’ll let Star Wars fanatics decide who’s who).  Core Wars are brutal for ETF issuers, but a wonderful new hope for investors now able to build highly diversified portfolios for the cost of a trip to the movies.

The rise of the iShares empire began in the late 1990s (though the iShares brand wasn’t formally introduced until 2000, the same year IVV launched).  However, it wasn’t until 2012 that iShares debuted their “Core ETFs” and fanned the flames of Core Wars.  In a press release announcing the launch, Mark Wiedman, Global Head of iShares, said:

“As more and more investors turn to ETFs for the diversification and exposures they seek in the core of their portfolios, we saw the opportunity to offer a cost-effective suite of funds that still provide the same professional quality you expect from iShares.

Vanguard’s low-cost empire has roots going back to 1976 with the creation of the first S&P 500 index fund.  The Vanguard core ETFs listed above all launched between 2005 – 2010, but for many investors, Vanguard has long been synonymous with low cost, core exposure.  In Vanguard’s press release referencing the launch of VOO in 2010, then CEO Bill McNabb said:

“The new Vanguard index funds and ETFs offer our trademark low costs and tax efficiency, and aim for the utmost tracking precision.”

The granddaddy of ETFs, State Street, began a Core War offensive last October and quickly won their first major victory by stealing the Empire’s secret weapon plans, TD Ameritrade’s commission-free ETF platform.  Of course, State Street has a long and storied ETF history.  They were behind the launch of the first U.S.-listed ETF, the SPDR S&P 500 ETF (SPY) back in 1993.  However, it wasn’t until 2017 that they introduced a core suite of ETFs, the SPDR Portfolio ETFs.  In a press release, Nick Good, co-head of the Global SPDR business at SSGA said:

“Investors have been asking us to provide these solutions to offer them a greater choice for low cost ETFs. The launch of the SPDR Portfolio ETFs provides a solution that meets this growing demand.”

PowerShares entered Core Wars in September of 2017 with the launch of their PureBeta suite of core ETFs.  Somewhat surprisingly, they rolled out their low-cost ETF lineup without much fanfare (there was no press release).  However, it was certainly noteworthy given that PowerShares built the fourth largest ETF business on “intelligent indexing” or smart beta.

Charles Schwab established their core ETF lineup in 2009.  Schwab is akin to Han Solo in Star Wars – certainly no Luke Skywalker, but a constant pain in the side of the Galactic Empire.  On more than one occasion, Schwab has undercut Vanguard or iShares on fees.  Upon the initial launch of their ETF lineup, CEO Walt Bettinger explained the rationale:

“Schwab has been an innovator on behalf of investors and savers for decades and has endeavored to help them become financially fit. Today, we continue this tradition by offering investors an exceptional value through low cost access to domestic and global equity markets.”

Notice the words “low cost” or “cost-effective” in the press releases.  At the end of the day, that’s what Core Wars is about.  Investors want cheap, core portfolio building blocks and ETF issuers are battling it out to stay competitive (or alive).  The vast majority of ETF assets are in products costing 20 basis points or less (below data as of the end of 2017). 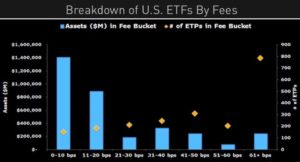 The five ETF providers waging Core Wars are also the five largest by assets under management (AUM).  If you look at 2017 net flows, it’s abundantly clear why State Street and PowerShares launched core ETF lineups (note that while Schwab’s 2017 net flows of $27bil are less than everyone except PowerShares, they had by far the highest growth %).

It’s tough competition to rule the ETF galaxy.  The dark side of Core Wars for ETF providers is fee compression.  The light side is they’re using the “low cost” force to pull assets from overpriced actively managed mutual funds and other expensive investments.  New assets help offset their lower fees.  The end game in all of this is unclear.  The only clear winners at this point are investors, whose destiny is unbelievably low cost portfolios.

By the way, just for fun, I googled “Core Wars” and stumbled upon the website corewars.org.  Apparently, Core Wars was a 1980s computer game where programmers competed by coding a set of instructions.  The goal of the game?  “Terminating every other program and surviving as long as possible.”  Hmmm, that sounds an awful lot like ETF Core Wars…