Why Fidelity Should Launch a Contrafund ETF

The New York Times recently chronicled the challenges of Fidelity, perhaps the most renowned and respected active management firm out there:

“In each of the last 10 years, Fidelity’s fabled mutual funds have leaked money, no matter how well they have performed. It is one of the longest stretches of outflows in the company’s 72-year history, the result of investors moving more heavily into cheaper index-tracking funds.”

Unreal: the Fidelity Contrafund has doubled SPX returns and crushed its peers yet sees nothing but outflows w/ -$15b out in last 12 mos, h/t @JSeyff pic.twitter.com/jp46UdDJyP 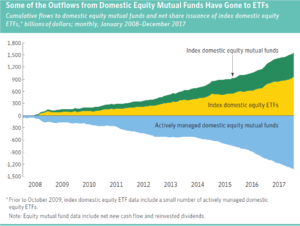 On the surface, performance apparently doesn’t matter anymore.  The Contrafund baby is being thrown out with the bathwater.  But here’s the question I would ask:  if the Contrafund was offered in an ETF, does anyone think it wouldn’t see significant inflows?  If so, I’ll take the other side of that bet.  As a matter of fact, I think a Contrafund ETF would vie for one of the fastest growing ETFs of all-time.  I think the investment vehicle – mutual fund versus ETF – is playing a larger role in Contrafund’s outflows (and Fidelity’s challenges) than meets the eye.

Yes, investors have seen the data on active management and are moving to passive.  Yes, investors want lower costs.  But active management isn’t going away.  The problem for Fidelity isn’t the Contrafund, it’s the delivery vehicle.  Think about it like this:  ETFs are often compared to digital music, while mutual funds are likened to CDs, or even cassette tapes.  When a great new album comes out, are you listening to it on a Walkman or Spotify?  If the album was only available on cassette, would you jump on eBay to buy a Walkman?  The mutual fund structure has simply become too outdated and burdensome for even significant outperformance to overcome.  ETFs offer far greater tax efficiency, the ability to operate with lower costs, transparency, no minimums, zero cash drag, and the flexibility to trade intraday.  Investors want their Contrafund in an ETF.

Fidelity was initially very slow to embrace ETFs.  Back in 2009, I wrote how that could be a mistake in the making:

“Fidelity faces an uphill climb as they attempt to develop a viable ETF strategy to avoid getting their lunch eaten by the competition.  They had better move quickly.”

That was after Jim Lowell, editor of Fidelity Investor, argued Fidelity should seriously consider buying iShares, which Barclays had just put up for sale:

“I think Fidelity has the opportunity of its future lifetime – not to mention another multibillion-dollar accretive lifeline.  In one fell swoop, Johnson will put Vanguard on its heels in the asset gathering business.  If Fidelity seizes it, you’ll hear me cheer Ned’s vigorous and bold leap beyond his firm’s own pale. If they don’t, then to the other victor go the spoils!”

Imagine the current investment and ETF landscape if Fidelity had purchased iShares.  Nevertheless, it took a while, but in 2013, Fidelity finally began slowly building out their ETF business, primarily on the back of low cost sector ETFs.  Altogether, Fidelity now offers 23 ETFs with close to $11 billion in assets – good enough for 15th largest ETF provider.  But this is Fidelity, once the king of the asset management world!

Enter actively managed ETFs.  Every year the refrain is, “This will be the year of active ETFs”.  And every year, we’re disappointed.  Currently, there are nearly 2,200 ETFs with over $3.5 trillion.  Active ETFs only represent slightly more than $56 billion.  Active equity ETFs?  Less than $10 billion.  Here are the top 10 active stock ETFs:

Look closely at this list.  No Fidelity, T. Rowe Price, American Funds, Dodge & Cox, Franklin Templeton, Janus Henderson, American Century.  The active management stalwarts are all absent.  It’s my belief the lack of name brands and flagship strategies is the sole reason why active stock ETFs have been slow to catch on with investors.

2) ETFs require daily transparency of holdings, while mutual funds only require quarterly disclosure (and up to 60 days in arrears).  Some active managers fear daily transparency will result in the front running of trades and/or giving away their “secret sauce”.

Let me address the second concern first.  Transparency = trust.  Trust is a must for today’s investors, who have been burned too many times.  Knowing exactly what your investments own provides a level of trust and from a portfolio management perspective, helps avoid overlap of holdings and allows monitoring of style drift.  What about manager fears of front running and losing an edge?  Well, I have asked countless industry experts whether these worries are legit.  Just two weeks ago, Dodd Kittsley, Director at Davis Advisors – one of the more successful active ETF providers, told me this:

“We really think that the concepts or the concerns that you mentioned, the giving away the secret sauce and the front running, are largely overblown. It was something that we haven’t had any issues with and we don’t anticipate any issues with on a go-forward basis. It’s something that our funds have traded very efficiently since their inception, and we expect them to do so.”

I posed a similar question to Cathie Wood, Founder & CEO of Ark Invest, who you’ll notice has two of the top six active ETFs on the above list.  Her response:

“No, actually not, because of the way we manage our portfolio. Actually, we go one step further. Once we’ve placed trades in the middle of the day, we will post them on our website and, for people who would like to be pinged whenever we’ve made a trade, they can see what we’ve done if they so choose. We are taking transparency to its limit, and we take it very seriously.”

I also asked ETF.com’s Dave Nadig about these concerns.  His take:

“If the portfolio managers genuinely believe it will cost them performance – they’re obligated, as fiduciaries, not to make their portfolios transparent.  Are they right?  Well, I’m crazy skeptical about that.”

There are people much more in the know than I am about executing large trades and using dark pools, etc. to avoid telegraphing moves, but I consistently hear the same message when I bring up concerns of front running and giving away the “secret sauce”:  they’re largely overblown.

Regarding the first concern, that active ETFs will cannibalize existing mutual fund cash cows, I would simply say that history is littered with corpses of companies who failed to adapt and shift to new technologies.  Blockbuster anyone?  Do you want to be in the taxi cab business these days?  I was in a Macy’s this past week and I’m not sure how they’re keeping the lights on.

While Fidelity is certainly not struggling, particularly given their diversified business model and the previously mentioned stock market fueled asset growth, I think Fidelity again has an opportunity of its future lifetime.  I think Fidelity can lead the entire asset management industry into active ETFs, while reaping the benefits of “first mover” and replanting their flag as active management king.  Just last week, BlackRock projected ETF assets to reach $12 trillion by 2023 and possibly $20 or $25 trillion by 2027.  This comes on the heels of State Street’s Jim Ross predicting ETF assets to $25 trillion by 2025.  I think Fidelity should take their tradition-rich history of active management and bring it to where the puck is moving, which is ETFs.

Some have speculated that Fidelity and other active shops are simply waiting for SEC approval on a non-transparent exchange traded managed fund structure.  I think that route would be a mistake.  Try explaining to investors “blind trusts” and “proxy portfolios”, and then telling them you don’t know the exact price you’re paying for a fund.  It’s too complex.  Simplicity is always better and, again, investors value transparency.

Fidelity has launched two actively managed bond ETFs – the Fidelity Total Bond ETF (FBND) & the Fidelity Limited Term Bond ETF (FLTB) – which together have over $500 million invested.  But the equity side is where I believe the real opportunity lies.  It’s where the tax efficient structure of ETFs really shines.

“We need to figure out how to capture the imagination and attention of the next generation of investor.”

The next generation of investor uses ETFs.