Can Indexers Break The Rules, If There Are No Rules To Break? by Lara Crigger

“The entity that actually makes the core decisions on which securities end up inside an ETF, and which has significant financial stake in the success of said ETF, doesn’t actually get regulated by the securities regulators at all.”

“I just thought that might be worth pointing out. You know, in case the SEC was still on the fence about why approving a Bitcoin ETF might be helpful.”

“72% of global ETF investors plan to increase their ETF allocation in the next 12 months.”

“Global X, which was founded in the midst of the 2008 financial crisis and launched its first international ETF in 2009, has turned into a thematic and alternative-income ETFs powerhouse.”

Navigating an Ocean of ESG Strategies by Daniel Sotiroff

“There is a trade-off between the strength of ESG exposure that funds in each cohort provide and the active risk they bear.”

“The ETF structure is unbreakable.”

ETF Tweet of the Week:  ARK Invest Founder Cathie Wood remains the center of attention in the investment world and on Financial Twitter…

ETF Chart of the Week:  Some investors might be surprised to learn Invesco offers a suite of low cost, plain-Vanilla ETFs in the same spirit as iShares Core or the Vanguard ETF lineup.  For whatever reason, Invesco hasn’t exactly marketed these “PureBeta” ETFs and, despite launching over 3 years ago, the 6 ETF lineup had only gathered about $125 million in assets.  That is, until last week, when the Invesco PureBeta MSCI USA ETF (PBUS) saw an $860 million inflow! 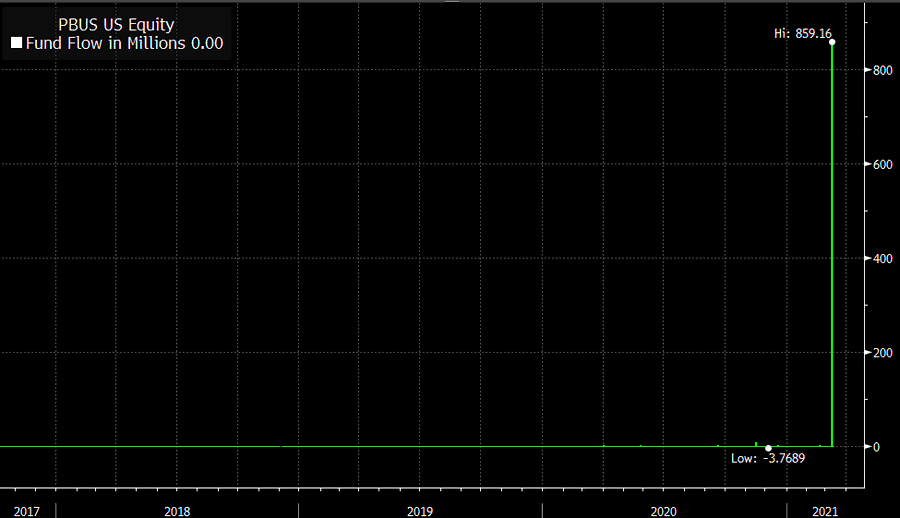