I’ve spent the better part of 12 years debunking ridiculous ETF myths.  It’s exhausting swatting down the same tired arguments and tropes over and over again…

“ETFs are causing a bubble”

“ETFs are the tail wagging the dog”

However, I recently came across an interesting theory which has me questioning the impact of ETFs on asset valuations.  The idea was put forth by the pseudonymous writer and tweeter Jesse Livermore, one of the brightest and most unique thinkers on the financial markets.  Here is Jesse via Patrick O’Shaughnessy’s Invest Like the Best podcast:

Jesse is suggesting that if market participants have high confidence in abundant liquidity – that they can easily buy and sell investments without meaningfully impacting prices – they might not require as high of a return.  Why?  Because there is less risk.  Back to Jesse:

Obviously in a modern market, you don’t have to price things at that price because you’re not going to lose your liquidity, you’re going to be able to sell to somebody else. You’re willing to accept lower yields, lower income, lower returns in exchange for the risk because the liquidity is not being taken away. There’s intrinsic value, and then what gets you all the way up to the market value is the liquidity value which is this latter point.  It’s the premium that you’re willing to pay on the asset because you know you can sell it to somebody else.”

What does this have to do with ETFs?  A key feature of ETFs is their ability to facilitate liquidity.  Investors can effortlessly buy or sell entire swaths of asset classes – stocks, bonds, commodities, currencies – all at the push of a button and with high confidence in pricing.  As a matter of fact, ETFs were born out of the 1987 stock market crash to serve as liquidity buffers.  The Securities and Exchange Commission (SEC) believed a lack of liquidity was a major contributor to what was infamously dubbed “Black Monday”.  One of the ideas the SEC floated as a potential solution to help minimize future crashes was a security that represented a basket of stocks, but could be traded just like an individual stock.  The idea was that such a security could change hands without impacting the underlying stocks, providing additional liquidity to the markets.  Fast forward to today and there’s nearly $5 trillion invested in ETFs, which represent some 30% of secondary exchange trading volume.

If ETFs help facilitate market liquidity, then they are potentially driving asset valuations higher.  Interestingly, improved liquidity may be only one of multiple factors at play.  Jesse penned a blog several years ago describing how reduced frictions of investing – think lower costs, the ability to easily diversify, no commissions – may also be impacting valuations:

“As the market builds and popularizes increasingly cost-effective mechanisms and methodologies for diversifying away the idiosyncratic risks in risky investments, the price discounts and excess returns that those investments need to offer, in order to compensate for the costs and risks, comes down.

In the year 1950, the average front load on a mutual fund was 8%, with another 1% annual advisory fee added in.  Today, given the option of easy indexing, investors can get convenient, well-diversified exposure to many more stocks than would have been in a mutual fund in 1950, all for 0%.  This significant reduction in the cost of diversification warrants a reduction in the excess return that stocks are priced to deliver, particularly over safe assets like government securities that don’t need to be diversified.  Let’s suppose with all factors included, the elimination of historical diversification costs ends up being worth 2% per year in annual return.  Parity would then suggest that stocks should offer a 2% excess return over government bonds, not the historical 4%.  Their valuations would have a basis to rise accordingly.”

To summarize, Jesse is postulating that the ability to easily buy and sell assets with minimal market price impact, along with an ability to cost-effectively diversify investments, may reduce excess returns required by investors, thus leading to increased valuations.  A simpler way to think about this:  in the past, investors required higher market returns to compensate them for the significant costs associated with buying investments (liquidity costs, fund fees, commissions, etc).  With those costs reduced, investors do not require as high of a gross return in order to earn the same net return.  Valuations adjust (rise) accordingly.

The entire ETF ecosystem has continued evolving over the past nearly 30 years, with knowledge and technology advancing such that liquidity has continually improved, bid-ask spreads have narrowed, and expense ratios have declined. 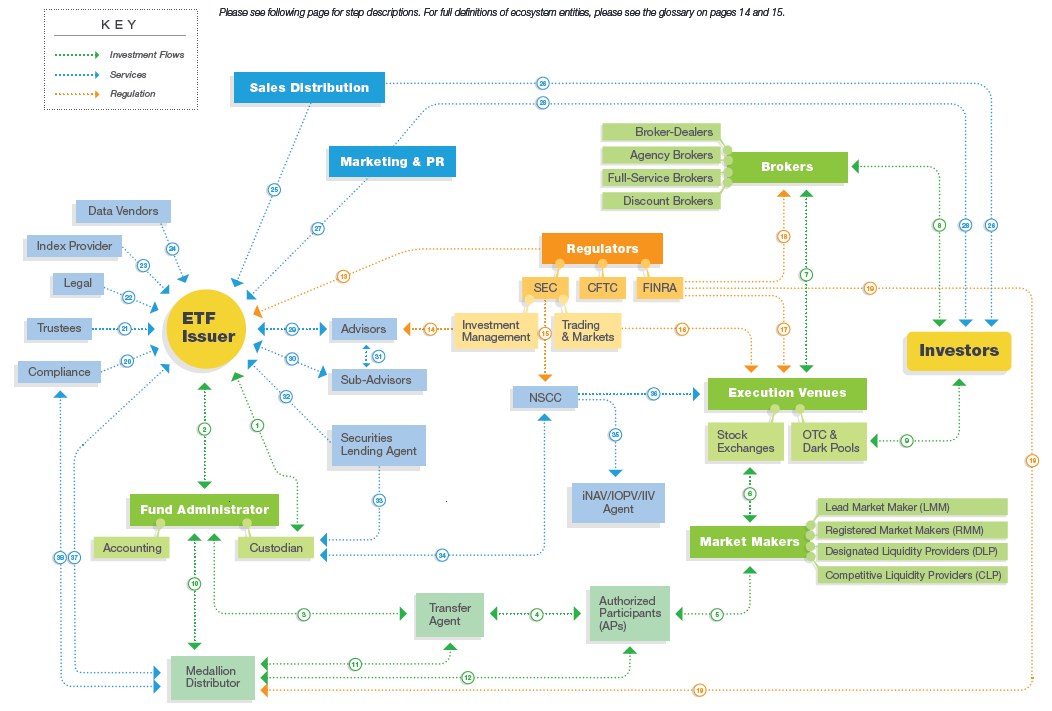 So, what’s the takeaway?  Since ETFs provide investors with liquidity, diversification, and lower costs, then it’s reasonable to assume they have driven valuations higher!  Just not in the way fear mongers suggest.  ETFs aren’t some bogeyman irrationally driving market prices higher.  There is nothing inherently wrong or broken with the ETF structure.  Instead, a range of ETF benefits are potentially resulting in increased valuations – likely at the margins, but interesting nonetheless.  Unfortunately, that doesn’t make for salacious headlines.

One final note:  I think we can say with certainty that ETF costs will continue shrinking.  We can also say Silicon Valley-like ETF innovation means investors will be able to further diversify investment portfolios, if desired.  However, there is no guarantee that ETF liquidity (or any investment’s liquidity) will remain robust during periods of market turmoil.  I highly recommend reading Corey Hoffstein’s Liquidity Cascades for a deep-dive, but it’s fair to speculate that if ample liquidity can drive valuations higher, then a lack of liquidity can push valuations down.  From Corey:

“If that liquidity disappears during periods of stress, it can lead to cascades that send markets spiraling out of control… Variable liquidity, in and of itself, is not inherently a problem.  When substantially thinning liquidity meets high liquidity taking needs, however, there can be a catastrophic mis-match in the market.”

ETFs again proved their mettle during the most recent period of stress, the Coronavirus crash.  That won’t stop scrutiny over the growing influence of ETFs on the financial markets.  That’s healthy and productive.  It’s also important to remember that nobody wants to go back to the days of less liquidity, higher costs, and fewer opportunities to diversify a portfolio.  Markets evolve over time in pursuit of better investor outcomes.  ETFs are part of that evolution.  Our understanding of the impact of ETFs on markets is also still evolving.