I recently came across one of the more shocking charts I have seen in quite a while.  FlowingData compiled figures from the Bureau of Labor’s 2016 Consumer Expenditure Survey on how different income groups spend their hard-earned money.  They then fashioned this data into several fascinating graphs.  First, the breakdown of annual spending by income group: 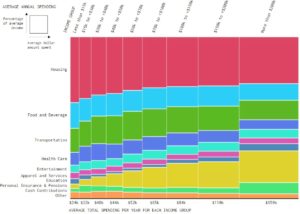 Two quick things to note here:  1) Take a look at the average total spending per year for each income group at the bottom of the chart.  For lower income groups, they have to borrow money just to make ends meet.  2)  Lower income groups spend a higher percentage of income to cover basic necessities: housing, foods, transportation, health care.  Which leads to what I’ll call the “obvious shocker”: 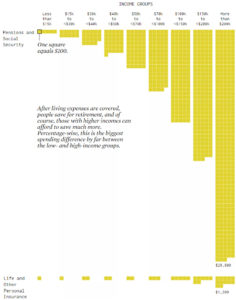 Notice the enormous discrepancy between what higher and lower income groups are able to save or count on for retirement.  Obviously, it makes sense that higher income households are able to sock away more money for retirement.  However, the gap here is cavernous.  An average of $29,800 annually for the highest income group compared to $500 for the lowest income group.  You’ll also noticed the figures drop fairly steeply as you move down the income range.

According to the U.S. Census Bureau, the 2016 U.S. median household income was $57,617.  In addition, a report last year from the National Institute on Retirement Security found that “about half of households age 55 and older have no retirement savings” and “when all households are included – not just households with retirement accounts – the median retirement account balance is $2,500”.  Take a look again at the above charts.  Houston, we have a problem.

There are all sorts of issues that can be debated based on this data – from growing wealth inequality to the costs of housing and healthcare.  But the lack of retirement savings is an issue with profound societal implications.  What happens as a larger percentage of our country can’t afford to meet basic needs in retirement?  What happens if the strain of a growing government debt burden further reduces retirement income via cutbacks in Social Security?  If retirees don’t have money to spend, what happens to our economy?

I certainly don’t have all of the answers, but it’s time to start talking about the problem.