Understanding the difference between a prediction and the probability of a particular outcome occurring is an important distinction for successful investors.  Anyone, regardless of their specific knowledge or expertise, can toss around market predictions.  Probabilities are based on historical data sets and mathematics.  Predictions are absolute, right or wrong.  Probabilities run a spectrum, from highly unlikely to extremely likely.  Even experts possessing a deep understanding in certain areas are not guaranteed predictive success.  Relying on probabilities does not guarantee success either, but it can stack the deck in your favor and help you mentally prepare for unexpected outcomes.

I bring this up because predictions and probabilities were front and center this past weekend as my hometown Kansas City Chiefs faced the Tennessee Titans in the NFL’s Wild Card round.  Pundits were in universal agreement predicting a Chiefs victory:

The mathematical probability of a Chiefs win, based on historical data (both 2017 season analytics, as well as historical NFL postseason data), was also highly likely.  Vegas favored the Chiefs by 8.5 points and according to ESPN.com’s win probability metrics, Kansas City began the game with a 74% chance of winning (which comports with this statistic: “Over the past five years, teams favored between 7-9 points have won those (playoff) games 74 percent of the time.” – KC Star)

As the game unfolded, the probability of a Chiefs victory actually increased, reaching a high of 97.9% as the Chiefs led 21-3 with less than 13 minutes to go in the 3rd quarter. 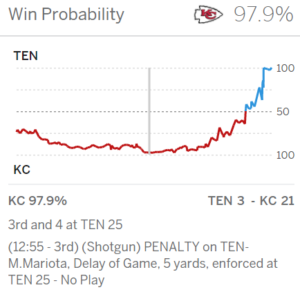 The rest, as they say, is history.  The miniscule 2.1% chance of defeat hit and the Chiefs lost a devastating heartbreaker 22-21.  All 11 ESPN predictions were wrong, but notice that in terms of probability, there was a 26% chance at the outset of the game that the Chiefs would lose (and still a 2.1% chance even when things looked grim for the Titans in the 3rd quarter).  So, what does this have to do with investing?

First, like sports predictions, investment predictions are worthless.  Simply put, ignore predictions on stocks, bonds, or any other investment.  Nobody, not even “experts”, can predict the future.  It really is that simple.  I typically like to put prognosticators into three camps:  1) idiots, 2) knowledgeable, but wrong, and 3) lucky.

Second, as it relates to probabilities, unless the probability of an event occurring is 100% or 0%, there is always room for multiple outcomes.  Knowing and appreciating this fact can allow you to prepare accordingly.  Currently, elevated stock valuations seem to generate the most concern for investors.  After a 2017 which saw the S&P 500 return nearly 22% without a single negative month (and with positive returns 21 of the past 22 months), several measures of stock valuations are higher than their 25-year averages. 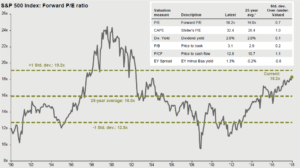 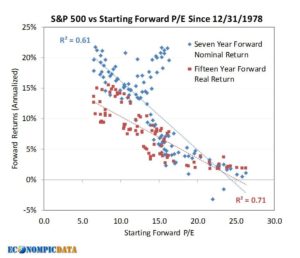 While there is a lot of debate surrounding the validity and efficacy of various valuation calculations, most investors are in agreement that 1) valuations are at least somewhat on the higher side and 2) valuations occupying the higher side of average will likely result in lower future returns.

If you ignore predictions such as “stocks will crash in 2018” or “stocks will go up 15% in 2018” and instead focus on probabilities, you can both stack the deck in your favor and minimize future pain.  If you know there is a higher probability of lower future returns, you can tilt the odds towards success by doing things such as saving more money, minimizing investment costs, and paying greater attention to taxes.  All can help compensate if lower returns do materialize.

Now, just like the Chiefs had a higher probability of winning and ended-up losing, a higher probability of lower future returns is not a guarantee of lower returns.  Stocks may very well race ahead and post higher than average returns.  Probabilities tell you that outcome is possible, even if unlikely.  Also, if you think in terms of probabilities, you will always be cognizant that outlier events can and will occur.  Knowing that can allow you to mentally and financially prepare now to minimize future pain (or maximize future gain).  What will you do if stocks crash 30%?  What if stocks jump another 30%?  Perhaps the odds of either are only 2.1%.  But that’s not 0%.  Thinking through these scenarios is a useful exercise to ensure you are properly equipped in the event they happen.  If you simply react to market predictions, you may sell out of stocks prematurely or buy right before an epic crash.

Any real Chiefs fan will tell you they were nervous heading into Saturday’s game, despite nearly every NFL analyst picking the Chiefs to win.  Chiefs fans know better than to put any stock into predictions, especially given Kansas City has lost playoff games in nearly every excruciating way possible.  Fans were optimistic, which probability supported.  Fans showed up at the game en masse – they didn’t allow fear from past playoff failures to dampen their enthusiasm.  But Chiefs fans also know to expect the unexpected.  The value of this approach is they could both think ahead to party preparations next weekend during the Divisional Round, but also mentally prepare themselves for an outlier event – which, unfortunately, occurred.