The investment industry has coined a phrase for what happens when Vanguard moves into a particular ETF category – it’s called The Vanguard Effect®.  Known for their rock bottom ETF costs, once Vanguard decides to enter a particular asset class or strategy – say emerging market stocks – magically (or out of desperation), ETF fees from other providers tend to fall, with investors reaping the benefits.  Bloomberg’s Eric Balchunas describes this well:

“When Vanguard releases a new ETF, it’s like Walmart coming into a new town. Every other store around that Walmart is going to be forced to lower their fees. This is similar for Vanguard because their cost ratios are so low, which is great for investors.  Vanguard essentially triggers fee wars.”

The problem for other fund companies engaging in these fee wars is they are essentially bringing knives to a gun fight.  Vanguard has a unique structure whereby the company is owned by its funds, which are owned by fund shareholders.  Effectively, this means any company profits are directed back to lower existing fund expense ratios and improve services to investors.  Rich Powers, Vanguard’s Head of ETF Product Management explains the benefit (both to Vanguard and the investor):

Today, Vanguard announced the launch of their first actively managed ETFs, which will debut in February 2018.  There will be six ETFs in all, five single factor ETFs and one multi-factor ETF, each using quantitatively-driven, rules-based investment processes: 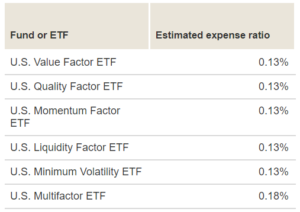 Take a close look at the expense ratios on these products.  This should scare the living daylights out of any fund company offering traditional actively managed mutual funds and/or “smart beta” ETFs.  It wasn’t long ago that many fund companies late to the ETF party viewed smart beta as their golden goose.  They could offer investment strategies with active tilts and justify charging higher fees.  Sure, they might cannibalize some of their existing active mutual funds, but at least they were in the ETF game.  With Vanguard now aggressively moving into this space, there is no reason to believe The Vanguard Effect® won’t take hold, causing a cascading effect on fund costs.  Now, there are plenty of other low cost smart beta ETFs available, but the fund companies offering these products don’t enjoy Vanguard’s scale, which continues to grow as they vacuum-up assets.

This chart is why so many asset mgrs/insurers launching ETFs: fear of being devoured by Vgrd/BLK. Note: this flow ranking is out of universe of 750(!) asset mgrs. cc @AnthonyFJGarner pic.twitter.com/YKL22RK0JD

If you are surprised that Vanguard, a company best known for indexing or passive investing, is getting involved in active management – don’t be.  Roughly a quarter of Vanguard’s nearly $5 trillion in assets are already in actively managed mutual funds.  And don’t get hung up on terminology here – smart beta, active, etc. – Vanguard views them the same:

There are several takeaways here:

>  Active mutual fund companies who have failed to develop a cogent ETF strategy are in a world of hurt.  Smart beta ETF providers with no unique niche or value proposition aren’t in much better position.

>  Boutique actively managed/quant/smart beta ETF shops will be fine as long as they offer high active share strategies at a reasonable cost. Vanguard needs scale and, therefore, their strategies have limitations in terms of concentration and factor potency.  We’re quickly moving towards a barbell ETF industry, where the large, established players accumulate assets on one end and unique, innovative, high active share players accumulate assets on the other end.

>  A noteworthy aspect to Vanguard’s announcement is they are proceeding with fully transparent ETFs – daily transparency.  That runs counter to some of the non-transparent ETF filings out there (think NextShares).  I believe investors value transparency – this is the correct move.

The Vanguard Effect® is real and bone-crushing to fund companies.  Passive was the old battleground.  Active is the new front.