Perhaps the one question I get more than any other these days is, “What is bitcoin and should I buy it?”.  A close second is, “Why do you keep talking about bitcoin?!?”.  The fact that I keep hearing the first question is clearly at least part of the answer to the second.  I will address the first question in future posts, but let me say that I believe bitcoin and cryptocurrencies are something that will fundamentally alter our future world.  Every investor should have at least a basic understanding of how bitcoin/cryptos work and the broader implications of the underlying blockchain technology.  With that said, I want to focus on the full answer to the second question, which is something I only recently came to the realization:  I’ve actually seen this movie before with ETFs, and it’s a really good one.  There are some striking and surprising similarities between ETFs and bitcoin:

> ETFs have significantly lowered the cost of investing, much to the chagrin of traditional fund companies.  Bitcoin substantially lowers the cost of two parties transacting, reducing fees that would otherwise go to credit card companies and banks.

> ETFs are slowly killing the middleman – the fund salesman. Brokers receive no commission from offering ETFs, so they tend not to “push” ETFs.  More importantly, many investors no longer trust the middleman anyways.  Bitcoin is predicated on having no middleman. Talk to bitcoin enthusiasts, and you’ll largely find a mistrust of middlemen and centralized distribution control points.

> ETFs are often referred to as a newer, better technology. ETFs have been called the next generation mutual funds.  Bitcoin are obviously leveraging cutting edge technologies.

> ETFs have democratized access to strategies and asset classes that would have been extremely difficult for average investors to access just ten or fifteen years ago – Chinese stocks, oil futures, physical gold, innovative value and momentum strategies. There are also no fund minimums or net worth requirements to invest in ETFs.  Bitcoin is the ultimate leveler of the playing field. A person living in Kenya can mine and transact in bitcoin.  Anyone with an internet connection can own bitcoin.

> Speaking of the internet, it has been said the Web’s rapid rise helped fuel the growth of ETFs, providing transparency into fund costs and performance that was previously difficult to find.  Bitcoin has been called the currency of the internet, which facilitates the transparency provided by the underlying blockchain.

> ETFs offer intraday trading, providing investors the ability to buy or sell in a matter of seconds.  Bitcoin can be bought and sold in real-time 24/7. Money can be sent anywhere in the world in a matter of minutes.

> Millennials love ETFs, with 56% preferring ETFs as their investment vehicle of choice in a recent survey.  Millennials are infatuated with bitcoin, with more than 1 in 4 millennials even preferring bitcoin to stocks.

And, it’s not just the positive similarities between ETFs and bitcoin.  Every good movie needs a villain, a moment of despair, a challenge:

The ETF is reminiscent of the dot-com bubble – Yahoo Finance

> There have been some issues with the backend plumbing of how ETFs trade, most notably the “Flash Crash” in August 2015.  Some 850,000 bitcoin went missing on exchange Mt. Gox in 2014 and just this week, $300 million in Ethereum disappeared into thin air.

I could go on with additional examples of both positive and negative similarities between ETFs and bitcoin – comparing niche ETFs to initial coin offerings, the fact that traditional financial firms are scrambling to get involved in ETFs and bitcoin, etc – but you get the point.

Bart Stephens, Co-Founder of BlockChain Capital, recently told Fortune, “Every new technology that is confusing, fast-moving, and disruptive is going to be controversial.”  We can debate the merits of bitcoin – is it a currency, store of value, means of transacting like PayPal, worthless?  What can’t be disputed is that it’s making a lot of incumbents, particularly in financial services, nervous.  Given that I’ve seen the exact same movie before with ETFs, that makes me extremely excited about the future prospects for bitcoin and other cryptocurrencies – which is the reason I can’t stop talking about them.

As a quick aside, a “crossover” movie with ETFs and bitcoin is already in the works.  Several fund companies are working towards launching bitcoin ETFs.  Recently, CME Group announced plans to launch bitcoin futures, following a similar announcement from Cboe back in August.  Bitcoin futures would allow firms like VanEck and Rex to resubmit their withdrawn bitcoin ETF applications to the SEC.  The Winklevoss Twins (yes, the ones from Facebook/”The Social Network”), have been attempting to launch a “physically-backed” bitcoin ETF for years.  That seems to be inching closer to the finish line.  Amplify and Reality Shares recently filed registration for ETFs tracking companies involved in blockchain technology.  Bloomberg’s Eric Balchunas has likened the bitcoin ETF race to “The Cannonball Run”.  Enjoy the show! 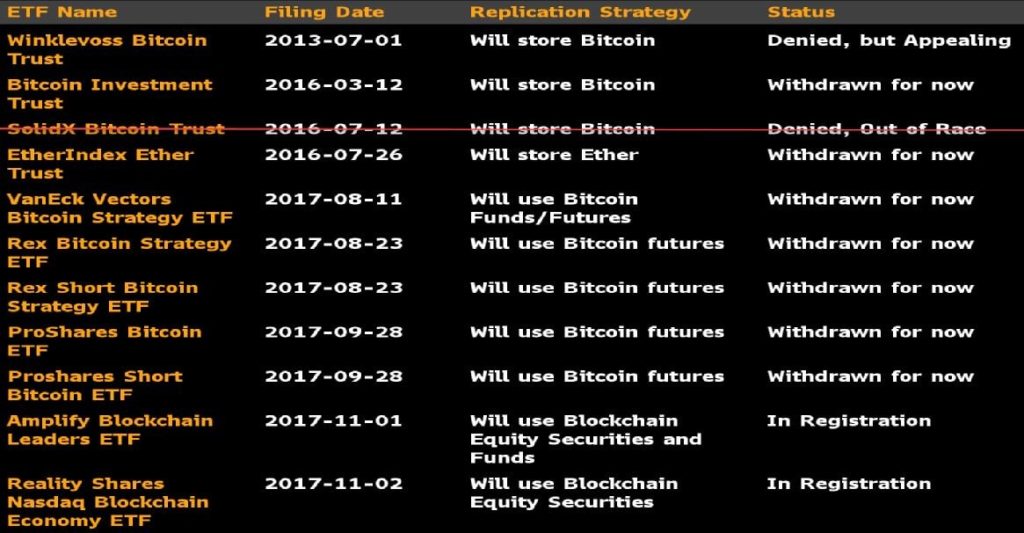 While bitcoin and cryptocurrencies are extremely complicated, if you would like to get up-to-speed fairly quickly, I highly recommend reading the original white paper from purported bitcoin founder Satoshi Nakamoto and then listening to this masterfully produced three-part podcast series from Patrick O’Shaughnessy.

I would also be remiss if I didn’t mention a recent interview I conducted with BlockTower Capital’s Ari Paul, a leading cryptocurrency expert.  On November 28th, I will be interviewing, Jack Tatar, co-author of Cryptoassets: The Innovative Investor’s Guide to Bitcoin and Beyond.

Lastly, here is an excellent website to track cryptocurrencies.